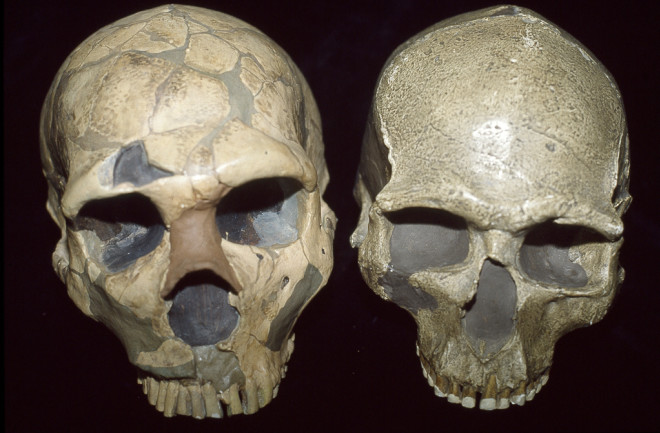 Replicas of the La Ferrassie 1 (Neanderthal) and Predmosti 3 (early modern) skulls. Image courtesy of The Natural History Museum London. The brains of Neanderthals were about the same size as those of humans, but they were not organized the same way. In a study published yesterday, researchers at Oxford show that much of the Neanderthal brain was dedicated to vision and movement instead of the higher order thinking characteristic of the human brain. They say this limited brain capacity could also explain Neanderthals' eventual demise. The researchers compared Neanderthal fossils with the skeletons of ancient but anatomically modern humans. To get an idea of how much actual brain tissue once filled these skulls, the researchers calculated the ratio of brain to body size for the skeletons and compared them with the brain/body size ratios of living primates. They found that Neanderthals dedicated a larger portion of their brain to controlling their movements than did modern humans, probably because of their larger body size. Likewise, limited daylight in Eurasia's northern latitudes forced Neanderthals to evolve bigger eyes in order to process the light, compared to the smaller eyes of humans with origins in sunny Africa. The portion of the Neanderthal brain dedicated to vision is larger as a result, according to the results published Tuesday in Proceedings of the Royal Society B. Since Neanderthals used a greater proportion of their brain for basic motion and vision control, they didn't have as much brain capacity left to innovate. For example, they had smaller parietal lobes, which humans use for navigation and language skills. When the Ice Age rolled around, Neanderthals couldn't create complex societies or trade networks to overcome resource scarcities, which scientists think ultimately did them in.