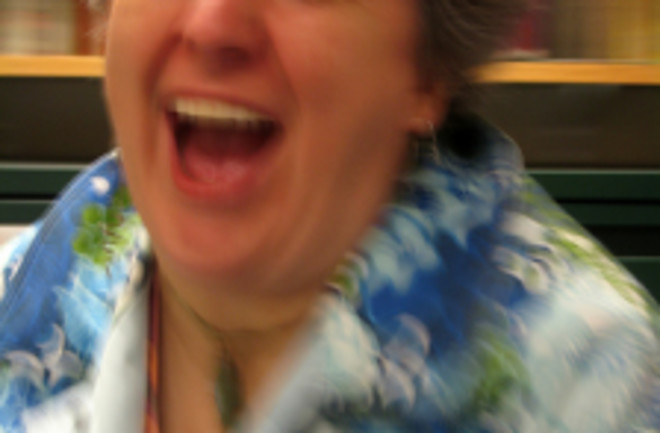 As a general rule on this blog, we do not feature studies involving people dying. However, we had to make an exception in this instance, if only for the first and last two sentences. Enjoy (but not too much)!

"Background: In the 5th century BCE, the Greek painter Zeuxis reportedly died while laughing at his painting of Aphrodite, which was commissioned by a woman who demanded that she be the model. In the 3rd century BCE, the Greek philosopher Chrysippus reportedly died laughing after giving his donkey wine and watching it try to eat figs (1). Although the expression “died laughing” is a common colloquialism, we are not aware of any contemporary reports of laughter-induced death, although there are reports of laughter-induced seizures (2) and laughter-induced syncope (3).

Objective: To describe a case of laughter-induced death.

Case Report: Physicians referred a 50-year-old woman with a prolonged rate-corrected QT (QTc) interval of 570 ms and an isolated incident of polymorphic ventricular tachycardia (torsade de pointes) after starting ziprasidone therapy for schizophrenia. She did not report syncope but did report occasional palpitations for 20 years that had been diagnosed as isolated, unifocal, premature ventricular contractions. Her medical history included hepatitis C, but she had no history of hypertension, diabetes, hyperlipidemia, or cardiovascular disease. Additional medications prescribed included clonazepam, risperidone, and zolpidem. Her blood pressure was 118/86 mm Hg, and resting heart rate was 60 beats/min. Cardiovascular auscultation was unremarkable. Echocardiography showed normal ventricular dimensions, wall thickness, and systolic function without valvular lesions. Exercise myocardial perfusion scintigraphy revealed normal regional wall motion without inducible ischemia. Laboratory testing found normal levels of serum glucose, potassium, magnesium, and calcium. We diagnosed ventricular ectopy with the acquired long QT syndrome and strongly recommended discontinuation of antipsychotic therapy. She declined, stating that her emotional well-being was more important than any risk from life-threatening arrhythmia because she became “crazy” without the medications. One month later, she was relaxing in the breakroom at work with colleagues when someone told a joke. She had intense, sustained laughter that continued for approximately 2 to 3 minutes until she suddenly collapsed. Coworkers tried to revive her. Paramedics found fine ventricular fibrillation followed by asystole and eventually discontinued resuscitation. A postmortem examination was not performed.

Discussion: Laughter-induced syncope is analogous to cough-induced syncope, which results from marked, transient elevation in intrathoracic pressure from repetitive bursts of forced expiration that decrease venous return and cardiac output (the Valsalva phenomenon) and lead to cerebral hypoperfusion and syncope. We postulate that our patient's laughter provoked a Valsalva phenomenon leading to enhanced vagal tone and bradycardia, which is known to trigger early after-depolarization and incite torsade de pointes in the setting of a prolonged QTc interval (4). For example, another case report recently described torsade de pointes induced by the Valsalva maneuver in the setting of QTc interval prolongation (5). We believe that ziprasidone and risperidone prolonged the QTc interval in our patient and created the setting in which bradycardia could trigger torsade de pointes. It is less plausible yet possible that a central nervous system lesion was the trigger instead of bradycardia, but this possibility cannot be excluded without autopsy. Although humor and laughter can reduce emotional stress and protect the heart (6), our report describes 1 example when laughter was not the best medicine and the expression “died laughing” had a literal meaning."