How the brain can lose — and reclaim — an abandoned mother tongue. 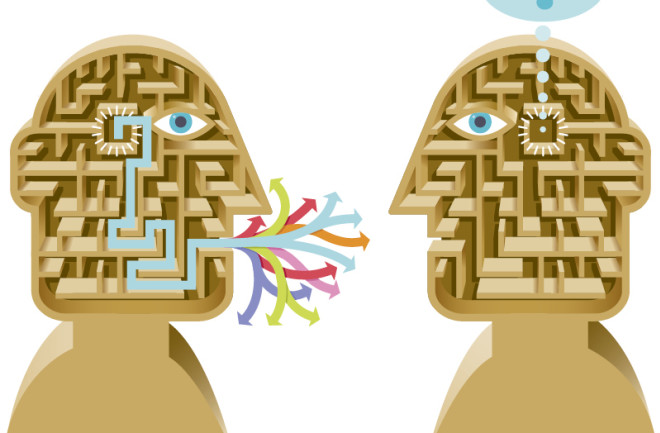 I don’t remember my first language anymore, or at least not most of it. When I was 2, I immigrated with my family into the United States from South India, and we all spoke Tamil. I didn’t know any English before I started school, so when my teachers noticed I was behind, my parents decided to stop speaking to me in Tamil. This was a common approach in the 1980s. Now, educators are more aware of the value of bilingualism.

I haven’t completely lost my connection to it. I still hear my parents using it all the time. I can watch and get the gist of a Tamil movie or newscast. I can understand my Tamil-speaking relatives and respond to them in English. Talking, though, remains impossible.

I know it’s lodged in my brain somewhere, but where? And what would it take to get it back completely?

I call Barry Gordon, a neurology professor at Johns Hopkins University, to find out how the brain regions responsible for understanding and speaking might affect my abilities. Is it possible something is amiss in the part of my brain concerned with speaking? That section is called Broca’s area, he explains, and some of the tissue surrounding this spot is also involved with speaking. Wernicke’s area is the portion responsible for comprehension. But Gordon was doubtful I was only retaining the language in one area and not the other.

That’s because language involves both perception and fine motor skills. Typically we learn a new tongue by listening to the sounds spoken around us and then imitating them. Since I stopped conversing in Tamil, it wasn’t just my speech skills that halted — my comprehension was also stunted. My Tamil remains rather basic, probably lingering around the level it was when I stopped speaking it. I can only understand my relatives because their day-to-day language is pretty simple. So why was I better at understanding than producing? Gordon says people always differ on language skills such as listening, speaking, reading and writing.

Monika Schmid, a linguist at the University of Essex and a leading expert on language loss, gives me another explanation: It’s always easier to listen than to produce. The cognitive energy it takes to come up with words is more intense. “Every time you want to grab a word stored in your brain, you need a certain amount of mental stimulation,” Schmid says.

This concept stems from something called the activation threshold hypothesis. Michel Paradis, an expert in neurolinguistics who is associated with McGill University in Montreal, came up with it in 1987, based on years of neuroimaging studies. The idea is that each time someone recognizes a word, the brain needs fewer neural impulses to access it than last time. If a person goes a long time without hearing a word, the activation levels needed to retrieve that word are higher. And producing a word is even more difficult because the excitatory impulse isn’t a response to an external stimulus — it needs to come from within.

OK, so it seems I lack the brainpower to go from understanding to speaking. But the limited Tamil I still know could help me to get there, right?

According to Arturo Hernandez, a psychologist at the University of Houston and author of The Bilingual Brain, age is critical for learning language. While experts long thought there was a single golden age, now the general consensus is that there are several. One occurs around age 3 to 5, precisely when I lost my Tamil.

In a 2015 paper, Hernandez and his colleagues studied 66 Spanish-English bilinguals — early learners who started English before age 9 and late learners who started after age 10 — and compared them with 16 people who spoke only English. Their goal was to see what has the biggest impact on how bilingual brains process sounds from their second language: proficiency, socioeducational status or how old they were when they learned their new language. It turns out the bilinguals’ age when they acquired English was most vital. Brain scans using fMRI showed that, when listening to English phonetic sounds, monolinguals, early bilinguals and late bilinguals’ brains lit up in different areas. In particular, young bilingual learners had more activity in prefrontal cortex regions involved with working memory and distinguishing between the sounds of two languages.

Familiarity with a language’s sounds can help people learn it more rapidly, even when they, like me, don’t have regular practice, Hernandez says. I explain I can certainly tell when someone passing me on the street is speaking Tamil. But what I need to figure out is whether I can sound out the words myself. He suggests having someone say a sentence to me in Tamil so I can repeat it. Someone never exposed to Tamil would have a near-impossible time performing this exercise.

So I try it — sort of. I watch a YouTube clip at home, since I’m self-conscious. Still, I’m happy to find I can easily mimic the video.

Abandoning your native tongue when you’re young, around the age of these Sri Lankan children, makes it hard to pick it back up as an adult. But with hard work, you can at least relearn the basics. Lakruwan Wannierachchi/AFP/Getty Images

Another key window for learning language appears to happen around our teen years. Before this time, kids are great at learning words more quickly than the rest of us. But they don’t hold on to long-term memories of many of those words. In this later phase, something solidifies, and we form lasting memories of vocabulary, grammar and language structure. That’s why if someone who knows a language never speaks it again after age 7, there’s a good chance they’ll forget most of it. But if you yank them away around age 12 or older and reintroduce them to it 30 years later, there’s a good chance they won’t miss a beat, Hernandez says.

Experts are still debating the exact age when language cements, but they’re getting a better idea. For example, in a study published in 2002, Schmid examined 35 oral testimonies of German Holocaust survivors who fled to England. They generally were given the choice to speak German or English in their interviews. Almost no one who left Germany before age 11 gave the interview in German. But many who left after age 11 did prefer German.

Hernandez tells me I’m in a gray area because, though I only used Tamil early in life, I was still exposed to it after I stopped speaking it. My prolonged exposure has likely let me retain a good amount of what little I did learn.

So I do have some foundation upon which to rebuild my use of Tamil. How long would it take to become fluent again? Hernandez is hesitant to give me an answer. True fluency would require total immersion, and likely five to 10 years of it to really get there. There are so many variables, such as my level of proficiency when I was little and how much I’ve been exposed to it since. I also have to consider how good I am at learning languages in general and how hard I want to work.

Schmid, the language loss expert, agrees, but also points me to a case study in which a Frenchman remembered speaking Mina, the language of the West African country of Togo, when he was a young boy. While born in France, he and his family, native Togolese, spent three and half years living in Togo, where he became fluent in Mina. But after returning to France when he was 6, his family was told not to use Mina with him anymore because it would hinder his French. When he was interviewed as an adult, he had forgotten most of the Mina he used to know. But after several sessions of age-regression hypnosis, he was able to speak full sentences in his childhood language.

“I think it will be a case of forcing yourself to say the first sentences,” she says. “Once that has been achieved, I’m not going to promise you anything, and I’m really only going with my gut feeling. But I suspect you will feel the flood gates open.”

I hope she’s right. I’ve since joined an online community to find people to converse with and look forward to speaking my first full Tamil sentences in a long, long time.