The police dogs that sniff out drugs and explosives may soon get some pointy-snouted competition. University of Baltimore computer scientist James Otto has been transforming lab rats into elite contraband detectors that could help tighten security at airports and other key checkpoints.

While trying to develop electronic chemical detectors, Otto realized that biology could do a better job. "Animals are essentially mobile sensor systems that are more advanced than anything we can build today," he says. But dogs have many drawbacks: "They're large, they take time to grow up, and training is labor intensive." Rats, which have a comparably acute sense of smell, could make a cheaper, faster, and more agile alternative. The difficulty lies in training them. So Otto has designed an automated system that teaches rat pups to rise up on their hind legs when they smell specific odors. A motion sensor detects the animal's pose, and a magnetic tracker confirms it is at the correct location; a computer then triggers a food reward. In lab tests, the rats were 90 percent accurate after two weeks. The next step is real-world trials. "We don't know how they'll react if there's a cat around," Otto says with a laugh. He also worries that travelers waiting in line at the airport might not react well to rats sniffing their luggage. 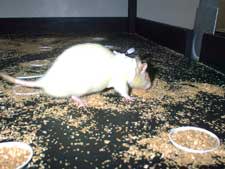 A future drug agent in training.Photograph courtesy of James Otto/University of Baltimore