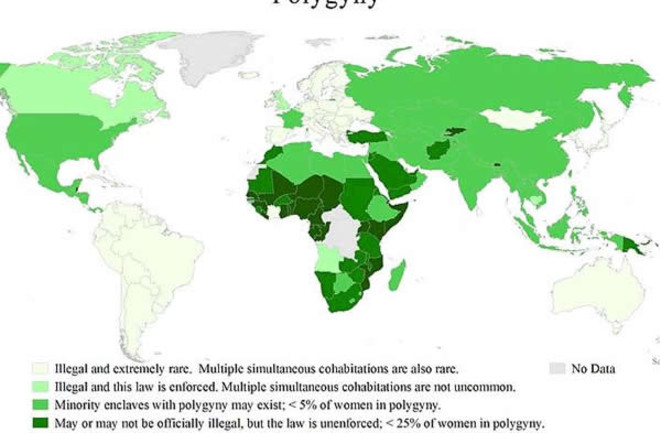 The title is rather loud and non-objective.  But that seems to me to be the upshot of Henrich et al.'s The puzzle of monogamous marriage (open access). In the abstract they declare that "normative monogamy reduces crime rates, including rape, murder, assault, robbery and fraud, as well as decreasing personal abuses." Seems superior to me. As a friend of mine once observed, "If polygamy is awesome, how come polygamous societies suck so much?" Case in point is Saudi Arabia. Everyone assumes that if it didn't sit on a pile of hydrocarbons Saudi Arabia would be dirt poor and suck. As it is, it sucks, but with an oil subsidy. The founder of modern Saudi Arabia was a polygamist, as are many of his male descendants (out of ~2,000). The total number of children he fathered is unknown! (the major sons are accounted for, but if you look at the genealogies of these Arab noble families the number of daughters is always vague and flexible, because no one seems to have cared much)

So how did monogamy come to be so common? If you follow Henrich's work you will not be surprised that he posits "cultural group selection." That is, the advantage of monogamy can not be reduced just to the success of monogamous individuals within a society. On the contrary, males who enter into polygamous relationships likely have a higher fitness than monogamous males within a given culture. To get a sense of what they mean by group selection I recommend you read this review of the concept by David B. A major twist here though is that they are proposing that the selective process operates upon cultural, not genetic, variation (memes, not genes). Why does this matter? Because inter-cultural differences between two groups in competition can be very strong, and arise rather quickly, while inter-group genetic differences are usually weak due to the power of gene flow. To give an example of this, Christian societies in Northern Europe adopted normative monogamy, while pagans over the frontier did not (most marriages may have been monogamous, but elite males still entered into polygamous relationships). The cultural norm was partitioned (in theory) totally across the two groups, but there was almost no genetic difference.  This means that very modest selection pressures can still work on the level of groups for culture, where they would not be effective for biological differences between groups (because those differences are so small) in relation to individual selection (within group variation would remain large).

From what I gather much of the magic of gains of economic productivity and social cohesion, and therefore military prowess, of a given set of societies (e.g., Christian Europe) in this model can be attributed to the fact of the proportion of single males. By reducing the fraction constantly scrambling for status and power so that they could become polygamists in their own right the general level of conflict was reduced in these societies. Sill, the norm of monogamy worked against the interests of elite males in a relative individual sense. Yet still, one immediately recalls that elite males in normatively monogamy societies took mistresses and engaged in serial monogamy. Additionally, there is still a scramble for mates among males in monogamous societies, though for quality and not quantity. These qualifications weaken the thesis to me, though they do not eliminate its force in totality.

In the end I am not convinced of this argument about group selection, though the survey of the empirical data on the deficiencies of societies which a higher frequency of polygamy was totally unsurprising.  I recall years ago reading of a Muslim male who wondered how women would get married if men did not marry more than once. He outlined how wars mean that there will always be a deficit of males! One is curious about the arrow of causality is here; is polygamy a response to a shortage of males, or do elite polygamist make sure that there is a shortage of males? (as is the case among Mormon polygamists in the SA)

Finally, I do not think one can discount the fact that despite the long term ultimate evolutionary logic, over shorter time periods other dynamics can take advantage of proximate mechanisms. For example, humans purportedly wish to maximize fitness via our preference for sexual intercourse. But in the modern world humans have decoupled sex and reproduction, and our fitness maximizing instincts are now countervailed by our conscious preference for smaller families. Greater economic production is not swallowed up by population growth, but rather greater individual affluence. This may not persist over the long term for evolutionary reasons, but it persists long enough that it is a phenomenon worth examining. Similarly, the tendencies which make males polygamous may exist in modern monogamous males, but be channeled in other directions. One could posit that perhaps males have a preference to accumulate status. In a pre-modern society even the wealthy usually did not have many material objects. Land, livestock, and women, were clear and hard-to-fake signalers to show what a big cock you had. Therefore, polygamy was a common cultural universal evoked out of the conditions at hand. Today there are many more options on the table. My point is that one could make a group selective argument for the demographic transition, but to my knowledge that is not particularly popular. Rather, we appeal to common sense understandings of human psychology and motivation, and how they have changed over the generations.

Addendum: When I say polygamy, I mean polygyny. I would say polygyny, but then readers get confused. Also, do not confuse social preference for polygyny with lack of female power. There are two modern models of polygynous societies, the African, and the Islamic. The Islamic attitude toward women shares much with the Hindu monogamist view, while in African societies women are much more independent economic actors, albeit within a patriarchal context. The authors note that this distinction is important, because it seems monogamy (e.g., Japan) is a better predictor of social capital than gender equality as such, despite the correlation.