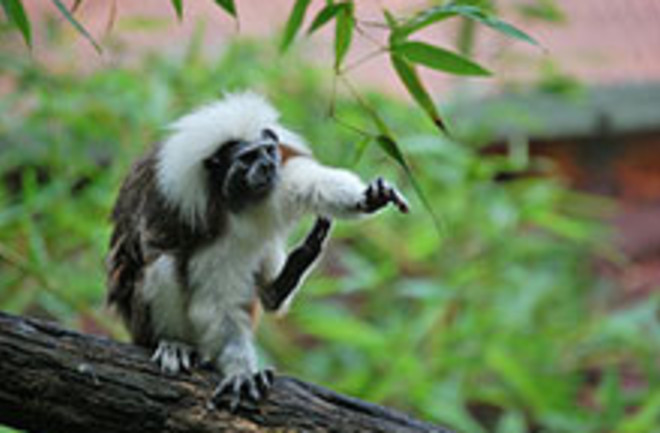 As anyone who has a favorite (and least-favorite) musical artist knows, music can affect our moods. Now it seems it can do the same for cotton-top tamarin monkeys, but only when the music is composed specifically for them, according to a study published in the journal Biology Letters. Except for one anomaly (they liked Metallica), the monkeys didn't respond to samples of human music--but the tamarins did respond to cello music that was reminiscent of their natural calls. Cellist and composer David Teie studied recordings of both happy and upset tamarins, and used them as the bases for two different kinds of monkey music.

"Basically I took those elements and patterned them the way we do normally with music," he says. "You repeat them, take them up a [musical] third — you know, using the same kind of compositional techniques we use in human music." He played the compositions on his cello and then electronically boosted them up three octaves, to a pitch that matched the monkeys' voices [NPR].

The song snippet based on happy monkey noises made the tamarin test subjects calmer, more relaxed, and more social. When the researchers played monkey music that sounded threatening, however, the animals became agitated, urinating and moving between perches more often. So what constitutes "good" monkey music?

Even though it sounds different, the music tamarins and people find relaxing or stressful shares some common core elements. Long legato notes and certain jumps in pitch, such as the jump from do to mi in the do-re-mi of Western music, are calming sounds for both the monkeys and people. Clashing chords and short staccato bursts seem to have menacing associations [Science News].

Still, the music that the monkeys enjoyed is not pleasant to the human ear, because tamarin calls are faster and higher-pitched than human voices and speech. The study seems to suggest that humanity's appreciation for music may have evolved from primate responses, but further research is necessary to evaluate this possibility. Comments neuroscientist Joshua McDermott:

“Although I don't see that these initial results tell us a whole lot about the origins of human music, I think there are extensions of [the study] that could." ... He also says he would like to see the researchers use a more objective measure of the monkeys’ stress—for example, levels of the hormone cortisol [Science News]. But the study's findings could be used in other ways, such as helping caregivers provide tamarind monkeys with a more pleasant environment in captive settings.