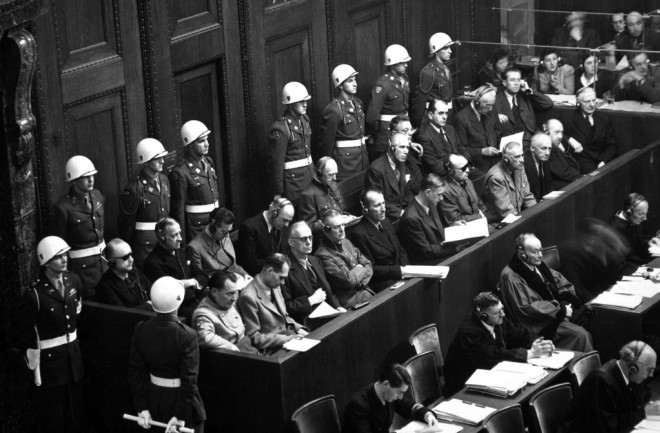 Looking down on the defendants' dock during the Nuremberg trials began in 1945. (Credit: The National Archives) In the wake of World War II, Nazi war criminals protested that they had been “only following orders,” which became known as the infamous Nuremberg defense. For decades sociologists, psychologists, and legal scholars have debated whether the defense was just a lame excuse or a valid legal strategy. Now, a team of psychologists says that coercion has a real effect on how the brain perceives the consequences of behavior. The study doesn't dismiss the heinous crimes committed by Adolf Eichmann and low-level officers; however, carrying out orders, researchers discovered, makes people feel passive and less in control, reducing the sense of connection between actions and their consequences. To arrive at their conclusion, researchers put a new spin on a classic — ethically dubious — experiment.

In 1961, a Yale University psychologist named Stanley Milgram launched an experiment that would become one of the most famous – and the most unsettling – in the history of psychology. Every time a student in an adjacent room got the answers to a memory task wrong, the volunteers were told to give them an electric shock. The shocks started out small but increased in 15-volt increments. From the adjacent room, the volunteers could hear sounds of pain, desperate pounding on the wall and loud pleas to stop. Eventually, all that filled the room was ominous silence. When the volunteers tried to stop, the experimenter pressured them to keep going and assured the volunteers that he would take responsibility for whatever happened.

Two-thirds of the volunteers (26 out of 40) followed orders all the way to the end — a 450-volt shock. Later, the volunteers discovered that the “learner” was actually a paid actor and there were no real shocks. However, the implication of the experiment was disturbingly real: People would do things under orders that would normally horrify them. Sense of Agency In the decades since Milgram’s experiment, other experiments around the world have produced the same result, but no one has been able to explain why people so readily follow orders. What we don’t yet understand, says lead author Emilie Caspar of Université Libre de Bruxelles and her colleagues, is exactly what people are experiencing in their own minds when they’re ordered to do something distasteful. At the center of that experience is what psychologists call a “sense of agency”, or feeling that you’re in control of your actions and that your behaviors have an immediate impact on other events. It’s the kind of subjective experience that’s vital to understanding human behavior, but very difficult to actually study in a lab. “Sense of agency is hard to measure. If you ask people explicitly to judge their responsibility, they may respond in a way that they think reflects best on them, rather than reporting the basic experience of action and outcome,” says co-author Patrick Haggard, a psychologist at University College London. To leap this hurdle, Caspar and her colleagues took an indirect approach. Actions and Consequences When people feel a sense of agency, the outcomes of their actions seem to happen instantaneously, but when people feel less responsible, they perceive a lag between their actions and whatever happens next. That means that researchers could use the perceived time between events as a sign of whether people felt responsible for their behavior. In Caspar’s experiment, one partner could choose to press a computer key in order to receive a small amount of money, but at the cost of taking money from the other person or giving them a small electric shock. If they chose not to harm their partner for financial gain, they could press a different key. Either way, a tone would sound a short time after the key press.

Other times, the volunteers had no choice; an experimenter stood beside the partner at the keyboard, watching them as she told them whether to harm their partners. Participants who were acting on orders perceived more time between their action and the result, which indicated that they felt a diminished sense of agency in the face of authority.

“These results suggest that voluntary actions made under coercion are experienced in some ways as if they were passive,” they wrote. The volunteers were experiencing a real change in their feelings of agency and responsibility, not just making a convenient excuse. According to EEG readings during another round of tests, following orders appeared to put a damper on brain activity involved in processing the outcome of one’s actions. “Coercive instructions appear to induce a passive mode of processing in the brain compared to free choice between alternatives,” Caspar and her colleagues wrote. Researchers published their findings Thursday in the journal Current Biology. Revisiting the Nuremberg Defense The finding may have important implications for the legal system, but the issue of personal responsibility under orders is still complicated. “Science can sometimes clarify how our minds and brains work, but society as a whole must choose, through its law, the rules by which we should live,” says Haggard. “On the other hand, our laws need to align with the realities of human cognitive capacity and human experience. That's the reason why, for example, people are held responsible for voluntary acts, but not for involuntary movements such as a sneeze or a muscle spasm.” But as Caspar and her colleagues wrote, “Clearly, society needs protection from harm, irrespective of whether the perpetrators experienced agency at the time of the act, or not.” In the future, the researchers say they would like to study whether some people are more susceptible than others to losing their sense of agency under coercion.