This morning, the world woke up to the news that

Scientists discover the difference between male and female brains

Britain's Independent today actually made that their front page. They went on to discuss "the hardwired difference that could explain why men are 'better at map reading'". The rest of the world's media wereno less excited. Well. I don't have time to get into criticizing the media or decrying gender stereotypes, so let's just stick to the science. The study in question, published in PNAS, is called Sex differences in the structural connectome of the human brain. The authors used diffusion tensor imaging (DTI) to estimate the integrity of the white matter tracts going in various directions at each point in the brain. In a large sample of 428 males and 521 females aged from 8 to 22, they report sex differences in the pattern of white matter connectivity. In general, the female brains were 'more connected' than the male, except in the cerebellum: here's the plot for a summary measure, the Participation Coefficient. 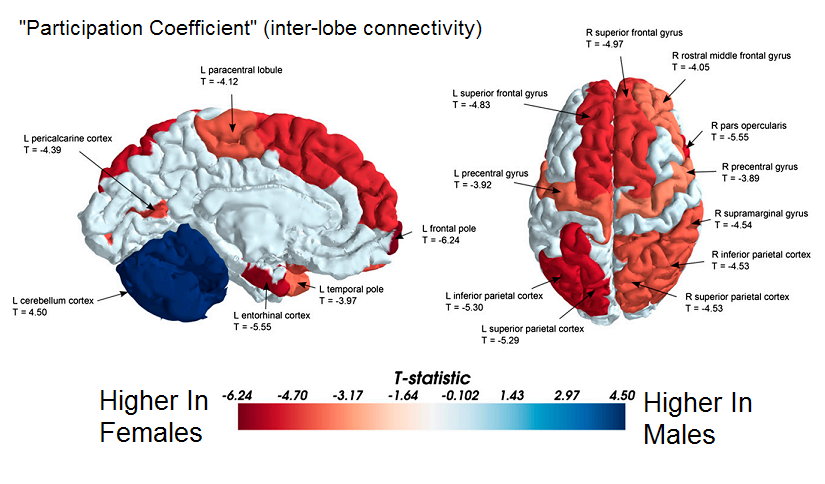 I have two issues with this: Head Motion. A perennial Neuroskeptic favorite, this one. A paper just last week showed convincingly that even modest amounts of head movement during the MRI scan causes changes in DTI. Various commentators on Twitter and elsewhere swiftly pointed out that it's not implausible that men and women might move different amounts on average, so that might account for at least some of these results. I doubt there's a big difference in motion, but in a sample this large, even a tiny sex bias in average fidgetiness would be detected and come out as statistically significant. Brain Size. Men have bigger brains than women on average. How this would affect DTI estimates of connectivity, I'm not sure. But it might well do. Here's a paper reporting that "connection length was negatively correlated with degree of connectivity". Longer connections - as seen in bigger brains - are weaker (or at any rate, appear weaker on DTI). I recently blogged about the fact that, relative to overall brain size, the corpus callosum, the major connection in the whole brain, is smaller in larger brains. This is an effect of brain size, not of sex, but it was misidentified as a sex issue for a long time... a cautionary tale? I'm not saying that motion and brain size are responsible for these results. But, given the previous literature, it's a clear possibility, which is why it's rather disappointing that the authors don't so much as mention either issue in the paper. It ought to be easy to check. Just re-run these analyses with two added covariates: overall motion, and total brain volume. If sex has an independent effect, after covarying for the potential confounding factors, then the paper's conclusions will stand on strong ground. But if it turns out that men and women's brains differ only in motion and size, well, it would have been better to know that from the start.