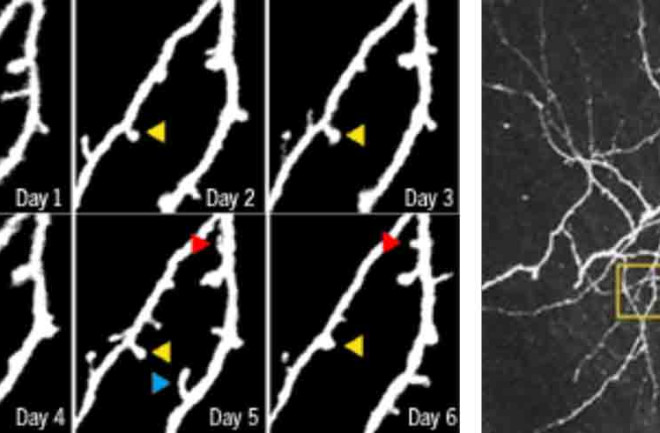 A branching neuron inside a mouse's brain (right) is seen through a microscope that collects light from fluorescing proteins. Time-lapse images (left) of the two neural filaments in the yellow box reveal stable knobby spines (marked by yellow arrowheads) that may create lasting memories. Some protrusions (blue arrowhead) come and go daily as the brain rewires itself, while others (red arrowheads) last a few days longer. | Karel Svoboda

By peering into the brains of mice, neurobiologist Karel Svoboda of Cold Spring Harbor Laboratory on Long Island is watching living neurons interact. His work provides the first intimate look at how synapses— relays between neurons— may form new memories.

Svoboda and his colleagues replaced parts of the skulls of young mice with transparent windows, located over a region of their cortices that processes sensory information from the whiskers. The animals were genetically engineered so that their neurons create a fluorescent green protein. A camera monitored the glowing cells while the mice explored their environment. For a month, Svoboda observed that spinelike projections continually sprouted from the neurons, then withered, some in less than a day. "The spines probably establish new synapses," he says. "If the synapse is a useful one, the spine will stay; if not, it will retract. The neurons are constantly exploring alternative arrangements, which probably has something to do with learning." Not all synapses remodel themselves. Some seem to last for months or longer, hinting that they relate to long-lasting memories.

The findings are bolstered by the work of Wen-Biao Gan, a neurobiologist at New York University's school of medicine. Gan and his colleagues monitored neuronal spines in the visual cortices of adult mice and found that 96 percent of the spines remained constant over one month. The discovery establishes that the brain's synaptic connections are stable enough to store long-term memories, Gan says. "Say a 10-year-old kid uses 1,000 connections to store a piece of information. When he is 80, one-quarter of the connections will still be there, no matter how things change. That's why you can still remember your childhood experiences."