"Is that a 7 Tesla magnet in your pocket, or are you just pleased to see me?" 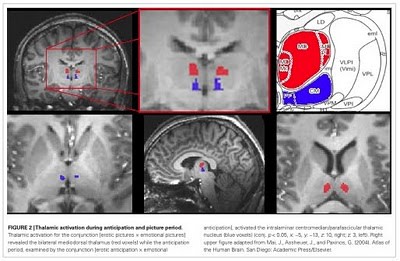 Most fMRI studies are done using MRI scanners with a field strength of either 1.5 Teslaor, most commonly nowadays, 3.0 Tesla. However, a few especially forward-thinking, by which I mean wealthy, research centres have started investing in 7 Tesla scanners.

Stronger magnetic fields mean that the scanner is able to pick up smaller differences in brain activation, with a better temporal and spatial resolution, although it's not all good news because some of the artefacts that can spoil MRI images also get worse with higher fields. 7 Tesla magnets are also so incredibly powerful that you literally have to tread carefully around them: move too fast through the field, and you can suffer dizziness, vertigo, and visual disturbances...

They showed heterosexual male subjects a range of pictures, some of them pornographic, others "emotional" but non-sexual. They found that anticipating seeing a picture, as opposed to than actually viewing one, activated different areas of the cortex and also of the thalamus (see image above). Sexual arousal was also correlated with activity in a third thalamic area.

This fits with previous work, so it's not too surprising, but it shows the power of 7 Tesla fMRI: as you can see, the thalamus is a small structure, and conventional fMRI struggles to localize activity to particular subdivisions of it. But we know that the thalamus is a hotbed of activity, because almost all the information that goes to and from the rest of brain passes through it. Until now, fMRI researchers have tended to treat the thalamus as a no-man's land but with any luck, 7 Tesla scanners will start to change that. For those who can afford them...