Making Music From Brainwaves: A History

A new paper in Brain tells the story of attempts to turn brain waves into music. The authors are Bart Lutters and Peter J. Koehler: Brainwaves in concert: the 20th century sonification of the electroencephalogram Electroencephalography (EEG), a technique for measuring brain electrical activity, was invented by German psychiatrist Hans Berger in 1929. Berger's EEG displayed the recorded activity in the form of graphs, using a mobile pen and a rotating drum of graph paper, but within 5 years, English physiologists Edgar Adrian and Brain Matthews reported the sonification (conversion into sound) of the EEG signal, using a horn loudspeaker. EEG went on to become an invaluable tool in neuroscience and in the diagnosis of epilepsy and other brain disorders. But it also inspired some unusual musical creations. In the 1960s, the experimental composer Alvin Lucier devised a piece called 'Music for the solo performer' in which the 'performer' sat in front of the audience, wired to an EEG. The signal was transformed, via various electronics, into sounds, including percussion: 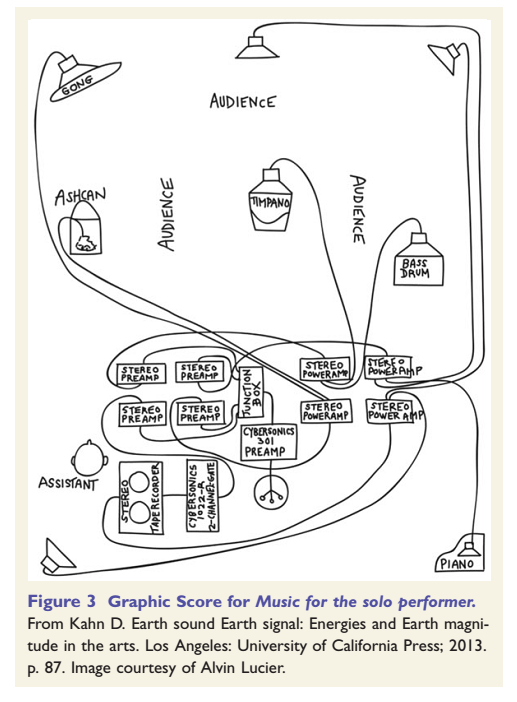 Lutter and Koehler say that Lucier's piece was first performed in 1965, although they don't say what the audience thought of it. Lucier's neuro-symphony was influential, however, in that it inspired other composers to experiment with EEG-based music:

In the composition 'In Tune' (1967), American composer Richard Teitelbaum (b. 1939) first used a synthesizer to sonify his alpha rhythm, along with other biological signals, such as heartbeat and breath sound. Five years later, David Rosenboom’s 'Portable gold and philosopher’s stones' (1972) incorporated the brainwaves of four ‘biofeedback musicians’ into one music texture.

In the 1970s, advances in EEG technique made it possible to reliably record event-related potentials (ERPs), the momentary neural responses to individual stimuli. It wasn't long before these too entered musical practice:

Rosenboom’s 'On Being Invisible' (1976–79) can be regarded as the most substantial contribution of this type, involving the real-time sonification of brainwaves, instantly reshaped by the ERPs arising from the performer’s brain upon hearing his own sonified brainwaves (Rosenboom, 1990). Here, the incorporation of ERPs provided an additional mental control switch, as ERPs and subsequent musical changes could be evoked by directing the selective attention towards the auditory stimulus.

More recently, the concept of brain-computer music interface (BCMI) has emerged as a research field in its own right. I have to say that while the idea of brain-based music is inherently rather interesting, I don't know if it's ever going to sound particularly good. Brain waves have rhythm, of a kind, but in terms of melody and harmony, I don't think there's much there.

Lutters B, & Koehler PJ (2016). Brainwaves in concert: the 20th century sonification of the electroencephalogram. Brain PMID: 27543971