Magic on the Brain

How magicians exploit a part of our brain responsible for visual awareness. 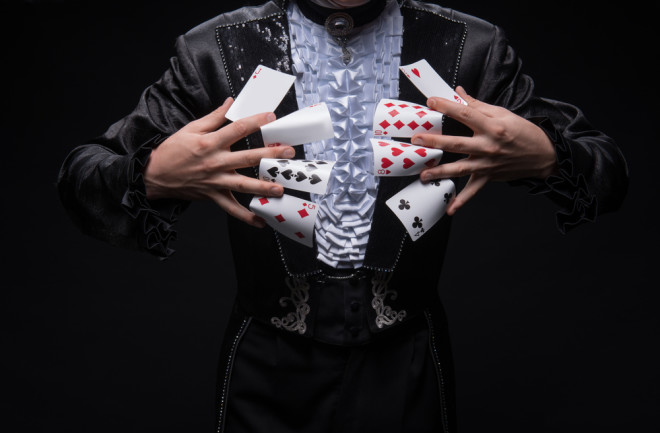 When a magician fools you with sleight of hand, it is not your vision that is to blame. Rather, the culprit is the parietal cortex, a small region of the brain behind your ear that aids in concentration.

In a recent set of experiments, psychologist Nilli Lavie of University College London found that this bit of gray matter holds the key to the phenomenon known as change blindness, in which people overlook the obvious when their attention is challenged. A classic example is the face test. A test subject is shown pictures of two faces in quick succession on a computer screen. Under normal circumstances, the subject always notices that the two are different, but if the person is diverted by a task, such as counting, or by a flicker on the screen, he frequently will not notice the change.

Lavie long suspected that the parietal cortex might be involved in this ruse, in part because recent functional-imaging studies hint that this region may be tied to visual awareness. To confirm the link, Lavie connected test subjects to a transcranial magnetic stimulator, which focuses a magnetic field on a selected region of the brain—the parietal cortex in this case—and temporarily disrupts the neural circuitry there. Then Lavie gave her subjects the face test. With the magnetic coils turned on, subjects typically failed to notice that the faces were different.

"Finding that the parietal cortex was involved was surprising because it has not been a traditional visual area," Lavie says. In fact, the parietal cortex is critical to auditory and tactile awareness as well as visual concentration, so Lavie's results are likely to have implications for a wide range of activities. "It shows that simply concentrating on another thing will disrupt your ability to have awareness." It also lends deeper meaning to the old conjurer's motto that magic occurs not in the magician's hand but in the mind of the spectator.