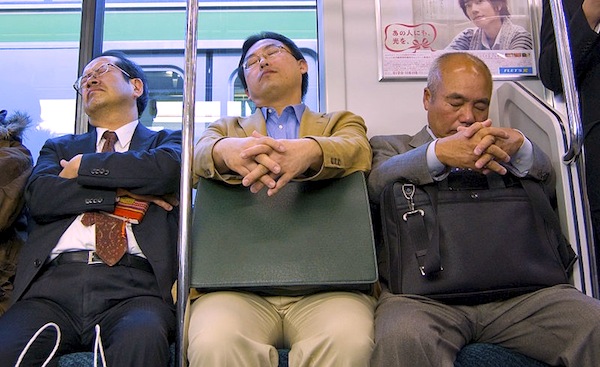 You will spend a third of your life asleep. If you don't, your waking hours will be of reduced quality and productivity. For 99% of us, seven hours a night is biological necessity. For a select 1%, what Melinda Beck at the Wall Street Journal dubs the "Sleepless Elite," less sleep equals more life. So-called short sleepers operate with a kind of low-intensity mania which allows them to go to bed late and wake up early without needing a gallon of coffee to get through the day. And, as it turns out, the ability might be genetic.

"My long-term goal is to someday learn enough so we can manipulate the sleep pathways without damaging our health," says human geneticist Ying-Hui Fu at the University of California-San Francisco. "Everybody can use more waking hours, even if you just watch movies." Dr. Fu was part of a research team that discovered a gene variation, hDEC2, in a pair of short sleepers in 2009. They were studying extreme early birds when they when they noticed that two of their subjects, a mother and daughter, got up naturally about 4 a.m. but also went to bed past midnight. Genetic analyses spotted one gene variation common to them both. The scientists were able to replicate the gene variation in a strain of mice and found that the mice needed less sleep than usual, too.

Dr. Fu's research is a reason for excitement because the goal is not just to locate the gene, but to find a way to manipulate sleep pathways safely. For those of us already alive, that means there might be better, safer, more effective stimulants in the future. For those not yet born, genetic engineering may enable future generations to spend less time sawing logs and more time enjoying life. More life! Less sleep! It's like a longevity enhancement that does nothing to extend your time alive, but instead maximizes your use of that time. But how do short sleepers use their time? And this, my fine friends, is where the real benefits of whatever genetic magic short sleepers possess comes into focus. Our immediate instinct when we hear we can get a benefit is "what is the cost?" For example, less sleep? I bet I'll become crazy. Or moody. Or more sleep won't mean I'm more productive. What ever makes me more energetic will make me too addled to focus.We are programmed by experience to be skeptical of too-good-to-be-true offers. The cynical part of me is reminded of a quote from LCD (R.I.P.) Soundsystem's jam "Pow Pow:" "But honestly, and be honest with yourself, how much time do you waste? How much time do you blow every day?" Would we really do any more with our lives if we had more time awake? What are the lives of short sleepers like? University of Utah neurologist Christopher Jones has found common traits among short sleepers in addition to their ability to only catch a few winks:

To date, Dr. Jones says he has identified only about 20 true short sleepers, and he says they share some fascinating characteristics. Not only are their circadian rhythms different from most people, so are their moods (very upbeat) and their metabolism (they're thinner than average, even though sleep deprivation usually raises the risk of obesity). They also seem to have a high tolerance for physical pain and psychological setbacks. "They encounter obstacles, they just pick themselves up and try again," Dr. Jones says.

Short sleep research is still in its early phases, but most of those studied thus far are successful, productive, happy individuals. They quite literally get more out of life. Short sleepers don't spend a third of their time on this planet asleep. I need to get me some of that. I'm sad to say I still need a whole pot of java after my requisite seven hours to be a normal human being. Fingers crossed for a pharmaceutical solution sometime soon.