• A Chimp Off the Old Block

Ai, a 25-year-old chimpanzee, is something of a celebrity due to her mental prowess. At the Kyoto University Primate Research Institute in Japan, she has learned to read several dozen characters in kanji, a form of written Japanese. Still, researchers were taken aback in February when they discovered that Ai's young son, Ayumu, may be teaching himself how to read. 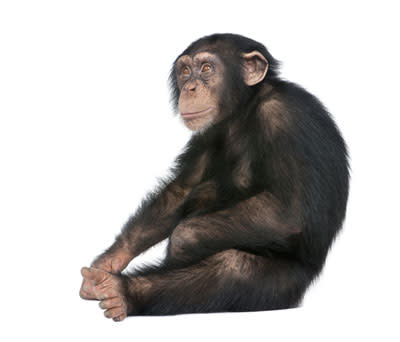 The chimp prodigy Ayumu demonstrates his literary skills by matching Japanese characters to colored shapes on a computer screen.Photograph by Tony Law

Ai spends part of each day at a computer monitor, where she likes to match written words to colors and shapes so that she can earn 100-yen coins to buy snacks. On February 16, when only a video camera was watching, 10-month-old Ayumu jumped up to the monitor and correctly matched the kanji word for brown with a brown square. "It was astonishing," says Tetsuro Matsuzawa, a primatologist at the institute. "He had never even touched the screen before." Researchers are now hopeful that Ayumu will continue to learn simply by observing his mother, without having to be coached.

So what did the precocious primate do with the 100 yen earned for making his first word match? "He bought some raisins from our vending machine," says Matsuzawa. "They're his favorite." — Curtis Rist