How a glimpse of the other side changes those who make it back. 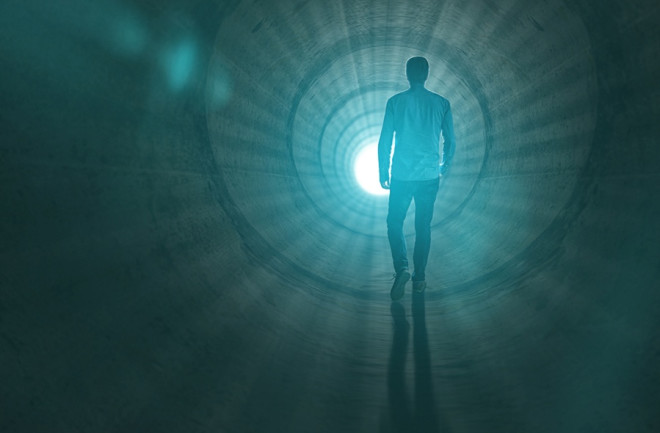 On a sunny April afternoon in 2013, while my dad was driving home after work, a 26-year-old man in a Toyota Camry broadsided him. The impact sent my dad’s Cadillac careening into a brick retaining wall. Paramedics had to saw off the door to extract him from the vehicle.

When I saw him several hours later, he was conscious but had no recollection of the crash. His blood pressure was so low doctors could barely detect a pulse. They thought they were losing him. Then something strange happened.

“I could feel myself slipping away as the nurses probed for a vein to give me blood,” he told me the next morning. “All of a sudden, I was overcome by an eerie silence. There was no sound at all. I saw myself on the gurney, and then an amorphous shadow crossed the wall. I can’t describe what happened or why, but from the moment the room got quiet, it was as if I was in another dimension.”

Such near-death experiences (NDEs) aren’t as rare as you’d think. At least 5 percent of Americans claim to have touched death and lived to tell about it. Some people see a shadow, some a beckoning light. Others see apparitions of loved ones. Regardless of what people believe they see during those moments, some experts think NDEs like my father’s aren’t an external event, but a failing body’s attempt to grapple with crisis.

I was overcome by an eerie silence. There was no sound at all. I saw myself on the gurney, and then an amorphous shadow crossed the wall.

A 2012 study published in the International Journal of Behavioral Medicine lists myriad physiological explanations for NDEs, from neurotransmitter imbalances to REM sleep intrusion. But for my dad and others who’ve had a similar experience, it’s what happened after the NDE that was the hardest to understand.

A hard-core mathematician and science geek, my dad was never a sentimental guy — more prankster than poet. But as he navigated a difficult recovery in the months after his dance with death, he changed. He began studying religion and philosophy, even writing poetry. For Valentine’s Day, he sent my sisters and me chocolate-covered strawberries, complete with personalized prose.

Realer Than Real As a health journalist with a background in psychology, I had to uncover whether there was a scientific explanation for his newfound tenderness and appreciation for life. How did his NDE leave such an indelible imprint? How did it reboot his brain in such a way that he tapped into aspects of his psyche he never knew existed?

NDE researcher and neurologist Kevin Nelson of the University of Kentucky tells me fading blood flow, even for a few seconds, signals a crisis to the brain. That emergency launches a cascade of survival reflexes, not unlike fight-or-flight, that lead to the thoughts, feelings and sensations of an NDE. “It’s this physical and emotional crisis that translates to especially vivid recall of NDEs, but also to a shift in how survivors lead their lives following the experience,” he says.

When we’re staring death in the face, Nelson says, there’s strong evolutionary pressure to remember every detail. Survival demands an alert and attentive brain to meet the threat head on and be prepared to combat it again in the future.

So even though my dad is in his late 70s and usually is too absentminded to remember what he ate for lunch, his NDE is seared in his mind — something called preferential encoding, says Steven Laureys, a neurologist who is chair of the World Federation of Neurology Applied Research Group on Coma and Disorders of Consciousness and director of the Coma Science Group at the University of Liège in Belgium. My dad’s brain recorded every vision, every feeling, every sound, in such detail that the memories seem to color everything in his life.

Laureys admits researchers still don’t know “how an abnormally functioning brain can record an experience that’s so emotional, so vivid and so real.” But they have enough evidence to consider NDEs a physiological reality linked to brain activity.

“People tend to come back from NDEs happier and no longer fearing death. The experience becomes a cornerstone of their lives.”

In a 2013 PLOS One study, Laureys and his Liège colleagues compared NDEs with other memories of intense real-life events, such as marriages and births, as well as with memories of dreams and imaginary thoughts. To their surprise, NDE memories among a group of 21 coma survivors were much richer than any imagined or real event. “Even when the NDE happened decades before, patients’ memory of the experience was as vivid as if it occurred yesterday,” Laureys says.

It makes sense if you look at electroencephalography (EEG) measurements of activity in the brain when recalling an NDE. A 2014 EEG study published in Frontiers in Human Neuroscience found that NDE memories are stored as episodic memories — recollections of events that you yourself participated in, like recalling where you were when the 9/11 attacks happened, rather than simply remembering the fact that the attacks happened. Scientists from that same study also concluded that the seemingly otherworldly memories from an NDE give off electrical patterns that are similar to real memories and significantly different from imagined events. The researchers noted that those who had NDEs describe the experience as “realer than real.” All of the participants in the study said their NDE was the most powerful, intense and important experience of their lives.

Life After Almost-Death For my dad, the NDE provided overwhelming peace. While he was suspended between this world and the unknown, he says a force told him, “You’re not going to die today.” And he says he wasn’t ready to go — he had newfound motivations to explore.

“People tend to come back from NDEs happier and no longer fearing death,” Laureys says. “The experience becomes a cornerstone of their lives.”

My dad’s experience not only affected how he lives his life, but also how he relates to others. Now, he’s especially kind to strangers, more giving, always willing to lend a hand to someone who needs it. I’ve even seen him give money to panhandlers, something he seemed to shy away from before his accident.

Apparently, he’s not alone. According to a 2013 study published in the International Journal of Behavioral Medicine, people who had NDEs became more tolerant of others, gained a greater appreciation of nature and understood themselves better compared with those who didn’t experience an NDE.

Science can’t explain why a father who drove like a NASCAR star now writes treatises on safe and courteous driving. And it can’t explain how someone who lived by numbers now prefers penning philosophical missives. But research does give us some clues about how NDEs change people’s personalities. They become sweeter, softer and more reflective — just like my dad.

[This article originally appeared in print as "A Brush With Death."