Julie Sedivy is the lead author of Sold on Language: How Advertisers Talk to You And What This Says About You. She contributes regularly to Psychology Today and Language Log. She is an adjunct professor at the University of Calgary, and can be found at juliesedivy.com and on Twitter/soldonlanguage.Due to a migratory childhood (born in Czechoslovakia, and eventually landing in Montreal via Austria and Italy), English was the fifth language I had to grapple with in my tender years. On my first day of kindergarten, I spoke only a few words of English. I could see that my teacher had some concerns as to how well I would integrate linguistically; my stumbling English was met with pursed lips. 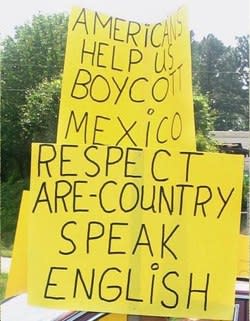 The pursed-lips reaction of my teacher is shared by many who advocate English-only legislation for the U.S., seeking to ban the use of other languages in schools, government documents, and even radio stations and signs on private businesses. The common worry is that making it easier for immigrants to function in their native language is a form of enabling—it prevents them from learning English, hobbling their full entry into American society. Over the past few decades, the waves of Latin American immigrants have only increased such concerns. For example, the U.S. Census Bureau reports that in 1980, less than 11% of the population spoke a language other than English at home. By 2007, that number had grown to almost 20%. If you looked no further, you might see this as evidence of a potential threat to the English-speaking identity of the U.S. But these fears are misplaced. Just like I did, most young immigrants from any country eventually master English. It’s true that the rate of Spanish-only speakers in the U.S. has increased dramatically, and that these immigrants often cluster in Spanish-speaking neighborhoods. But a more telling statistic is what happens to such families a few generations after they’ve arrived. As Robert Lane Greene reports in his book You Are What You Speak, it’s the same thing that’s happened to all immigrant groups in the U.S.: within the space of a few generations, they not only function perfectly in English, but in the process lose their heritage language. Even among Mexican immigrants, currently the slowest group in the U.S. to shed their ancestral language, fewer than 10% of fourth-generation immigrants speak Spanish very well. As Greene points out, who needs disincentives to speak the heritage language when the economic and cultural imperatives to speak English are already so great? My own family’s experience reflects these statistics. Though it was the fifth language I learned, English is by far the one I wear most comfortably. My children, who were raised in the Northeastern U.S., are effectively monolingual English speakers, and sometimes express resentment that I never spoke to them at home in French or in Czech. Without ready access to other-language friends and resources, the task of being solely responsible for their bilingualism felt too demanding, and potentially isolating. But I have to admit: based on recent research, it seems their resentment is justified. Aside from the most obvious advantage of wielding more than one language, there’s now a booming scientific literature suggesting that bilingualism is a bracing tonic for the brain. The advantages seem to hinge on the cognitive machinery of executive control—mental processes that allow us to switch quickly between tasks or competing information. Bilinguals tend to outperform monolinguals whenever they have to ignore distracting information and focus on some relevant dimension. For instance, they respond faster and with fewer mistakes on questions from a Stroop Test, like this:

(The Stroop test includes the name of a color written in a different color; the correct response for this test item would be red.)

Why would such an advantage emerge? We don’t know for sure, but the current thinking is that it’s a side effect of the mental exertion that’s needed for juggling two language systems. When a bilingual speaks in one language, the other language still pulses, so that while searching for the word speak, for example, the word hablar might come to mind. This is why you often see bilinguals in conversation with each other code switching

, or stirring their two languages together even within the same sentence. But bilingual speech, whether it overtly mixes languages or not, is a highly controlled process involving rapid-fire decisions about which words to choose and which ones to suppress. It’s as if living in two languages meant spending your verbal life in a never-ending Stroop test. More than just a neat trick, the effects of bilingualism are surprisingly far-reaching and stretch across the lifespan. A bilingual advantage for quick attention-shifting has been found in babies as young as seven months, well before these children ever utter their first words in either language. And the cognitive benefits are turning up on a number of measures that tap into cognitive flexibility. For instance, an intriguing Israeli study

led by Esther Adi-Japha found that the drawings of bilingual kindergarten-age kids were different from their monolingual peers. When asked to draw a picture of a flower that does not exist, monolingual children were fairly unadventurous, drawing perhaps a flower that was missing its leaves, or a flower with only one petal. Bilingual children, on the other hand, incorporated elements from completely different objects—producing for instance, a flower with a tail, or a flower with teeth. This kind of cross-category mixing in children’s drawings tends not to occur until kids are about eight years old, putting the bilingual kids on an accelerated timeline for this particular skill. At the far end of the lifespan, bilingualism may help postpone the symptoms associated with Alzheimer’s disease; some bilingual Alzheimer’s populations have shown delays of four to five years

in the onset of their symptoms as compared with their monolingual peers. But if you’re looking to boost your brainpower with bilingualism, simply taking an evening course in French or Spanish probably won't cut it. The greatest cognitive rewards seem to come to lifelong bilingual speakers who must regularly switch between their two languages. This makes psychological sense: in situations where only one language is pertinent, the other language becomes a bit more quiescent

, leading to less strident competition between the two language systems. This may have an impact on a person’s cognitive profile over time. In one recent study

, Anat Prior and Tamar Gollan compared Mandarin-English bilinguals, Spanish-English bilinguals, and monolingual English speakers living in San Diego. As you might expect, the Spanish-English speakers flipped between their languages on a daily basis. Mandarin-English speakers, on the other hand, kept their language use more compartmentalized. (Incidentally, Asian immigrants to the U.S. are among the fastest to lose their heritage languages.) All three groups were given a test in which they had to switch between sorting visual images either by their color or by their shape. Only the Spanish-English bilinguals showed a relative advantage when confronted with a sudden category shift; the Mandarin-English speakers were no different on this score than the monolinguals. In the end, it’s clear that English is not under threat in the U.S. ---bilingualism is. And the greatest cognitive benefits of bilingualism are likely to be reaped by those who are able to use their non-English language with neighbors, teachers, and bank tellers, those who can talk to other bilinguals in speech that is spangled with Spanglish or Chinglish or Franglais. In other words, those who are lucky enough to have the kind of bilingual environment that my kids never had. Just the kind of environment that English-only advocates seek to obliterate.