Learning the Alien Language of Dolphins 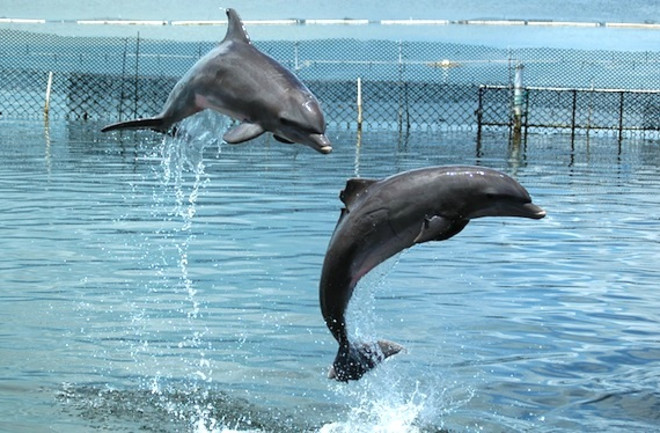 Humans and dolphins are inventing a common language together. This is big news! In all the hoopla over the world ending due to being asteroid-smashed, man becoming immortal thanks to the singularity in 2045, and Watson the trivia-machine winning

the story of budding interspecies communication got under-reported. Denise Herzing and her team with the Wild Dolphin project has begun developing a language to allow humans and dolphins to communicate. If successful, the ability to communicate with dolphins would fundamentally change animal intelligence research, animal rights arguments, and our ability to talk to aliens. Herzing and her team faced two huge problems when it came to talking to dolphins. The first problem is that the current state of animal language research creates an asymmetrical relationship between humans and the animals with whom they wish to communicate. The second problem is that (save for parrots) animal vocal cords cannot replicate human speech, and visa versa. Most, if not nearly all, animal language research involves either studying how animals communicate with one another, or teaching them a human language to see if they can communicate with us. There is a problem with both methods–humans don't learn much (if any) animal language in the process. Think of it this way: how many commands does the smartest dog you've met know? Some border collies, like Chaser, can learn upwards of 1000 words. Now how many words do you know in dog? Or parrot? How about gorilla or whale? Know any corvid? I bet you can at least read cuttlefish patterns, right? No? Of course, I'm being facetious, but with a purpose: up to this point, humans have always attempted to understand animal language by teaching animals how to talk to humans. The glaring flaw in this process of teaching animals to use human language is that it is nary impossible to prove the animal is using language, not merely playing a very complex game of repeater. There is a second, equally interesting problem. Think about your favorite science fiction series populated by aliens (for me, that's a toss up between Star Trek and Mass Effect). At some point in that series, an alien has introduced itself as having a very un-alien name, like "Grunt." The reason? "My real name is unpronounceable by humans." That is rarely an actual problem, because as it always works out the other alien species (why do we refer to aliens as "races" btw?) can pronounce our human words. One of the only films I can think of that doesn't have this common sci-fi fallacy is District 9. Humans and prawn seem to be able to understand the other's language in a rudimentary way, despite neither species being even remotely able to reproduce the other's sounds. Cetaceans pose the same problem: humans cannot whistle, squeak, chortle, or pop the way a beluga or bottle-nose can. Further, the higher squeals of some dolphins and the low rumbles of some whales are beyond the human auditory spectrum. Dolphins can't say a word in human languages and we certainly can't do more than parody the spectrum of cetacean sounds. Which presents quite a question: How in the heck did Herzing figure out a way to both not teach the dolphins an anthropocentric language and ensure the language was speakable by both species? Herzing's team developed a communication system with a sprig of technology and a heaping helping of ingenuity:

Herzing created an open-ended framework for communication, using sounds, symbols and props to interact with the dolphins. The goal was to create a shared, primitive language that would allow dolphins and humans to ask for props, such as balls or scarves. Divers demonstrated the system by pressing keys on a large submerged keyboard. Other humans would throw them the corresponding prop. In addition to being labeled with a symbol, each key was paired with a whistle that dolphins could mimic. A dolphin could ask for a toy either by pushing the key with her nose, or whistling. Herzing’s study is the first of its kind. No one has tried to establish two-way communication in the wild.

Amazing! Herzing's method is effectively the same as that used in Close Encounters of the Third Kind. The keyboard allows for dolphins to teach humans as much as the humans teach the dolphins. Furthermore, the matched whistle will allow for a more natural integration of communication into the dolphin's speech. Given the early stages of the project, it seems to have tremendous potential already. Yet Wired found it necessary to frame Herzing's breakthrough within the search for extra terrestrial intelligence. As an analogy, I totally understand the reference to aliens. That's why I used the examples I did above. What is frustrating is that the article seems to see Herzing's research only as important when in the light of alien communication. No disrespect to NASA (pace the Bad Astronomer), but I'd rather we dumped the funds from our space exploration and focused instead on the oceans of Earth. We've got enough aliens and unexplored frontier right here on two-thirds of our pale blue dot. Thankfully, the flow of information among SETI scientists and marine biologists is two-way. Information theorists like Laurence Doyle (mentioned in the side bar of the Wired article) has used techniques for signal-searching developed with SETI to determine that whales and dolphins use grammar and syntax in their communication. The consequences for genuine communication between a new species is enormous. It would dramatically improve animal intelligence research, as well as make a real case that non-human persons should have limited rights. Success with the dolphins might enable researchers to devise forms of communication with a whole host of other intelligent animals. And, in the far flung future, we might get ourselves a universal translator. I'm at least hoping for a collar like Dug's in Up!

Image of impressive dolphins by