Koko the Gorilla Dead at 46, Her Legacy Lives On 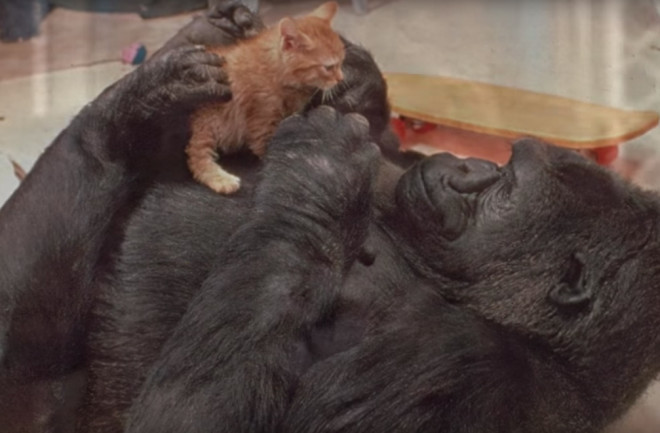 Koko playing with a kitten. (Credit: kokoflix/Youtube) Koko, a gorilla who was instrumental in expanding our knowledge of the inner lives and abilities of primates, has died at the age of 46. The western lowland gorilla was born at the San Francisco Zoo in 1971 on the Fourth of July — her given name was Hanabi-ko, Japanese for "fireworks child" — and was trained in sign language from a young age. Koko proved to be an adept learner and would go on to learn over 1,000 signs for human words, letting her communicate thoughts, feelings and desires to her human caregivers. It was a pivotal experiment, one that would expand our understanding of primate psychology. It also helped humanize our closest relatives. Koko died in her sleep, according to the Gorilla Foundation, a non-profit founded in 1976 to help support Koko and fund further experiments with great apes. Over the course of her life, Koko not only communicated with her human counterparts, but would adopt several kittens, whom she named and cared for. When her first, named "All Ball," was killed by a car, Koko signed "Bad, sad, bad" and "Frown, cry, frown, sad," and reportedly made a sound like human weeping. In addition to her groundbreaking work with sign language, Koko appeared twice on the cover of National Geographic — once in a photo she took of herself in a mirror — and was featured in multiple documentaries. She even made friends with Robin Williams, hugging and playing with the late actor during a visit. After news of his death broke, Koko was reportedly saddened and dejected. https://www.youtube.com/watch?v=I9I_QvEXDv0

Koko's facility with language enabled researchers to conduct sophisticated tests not possible with most primates. She was able to recognize herself in a mirror, for example — signing "Koko," "me" or "gorilla" when faced with her own image. She even talked about her emotions, indicating an awareness of her internal state, and occasionally lied about her activities using sign language. In some cases where she didn't know the sign for a word, Koko would occasionally put words together to form a new construction, such as using "scratch-comb" to signify a brush. These experiments and more forced researchers to reevaluate their assessments of primate mental capabilities, revealing a range of experiences and nuances of thought previously reserved only for humans. The work with Koko, led mainly by psychologist Francine "Penny" Patterson, did draw some criticism from researchers, who felt that some of Koko's actions may have been over-interpreted. Some of her emotional signaling, for example, could have been a simple response to the researchers prompts, and others have argued that her knowledge of sign language is thanks to conditioning — she received treats for correct signing — rather than cognition. Through decades of work with Koko, Patterson and others helped to further our conception of the primate mind, something that ultimately sheds light on our own cognitive processes. The simple act of learning sign language was in and of itself an achievement, and the window it offered into Koko's mind was invaluable. Other experiments with chimpanzees and bonobos have built on the research by probing great apes' abilities to understand human communications and respond, as well as experiments into the signs primates already use to communicate with each other in the wild. At 46, Koko lived well into old age for a gorilla, and her life represents over four decades of insight into primate psychology. Though she'll be missed, her legacy is monumental.