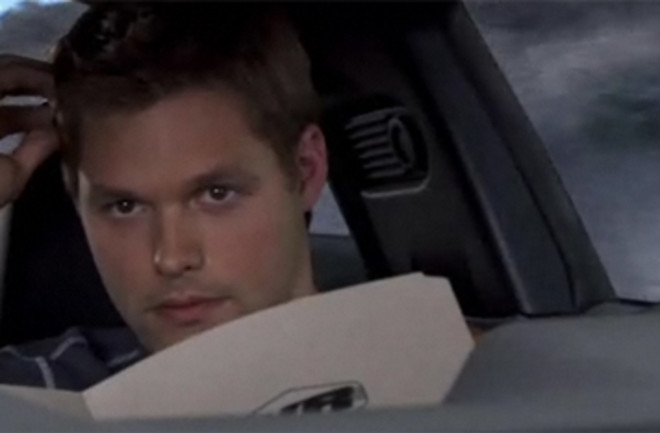 I almost laughed out loud at the start of last night's episode of Knight Rider. Mike Traceur sat in KITT's driver's seat, reading a dossier, and watching football as he cruised down some scenic highway—and why not, when he's got a car that can drive itself. Which is when it hit me: I've been writing about Knight Rider for weeks without looking into where we are on the whole self-driving car thing! I mean, a car that drives itself has to come before a talking car in the pantheon of useful technology, right? So, does anyone else remember back in 2005, when GM announced that they'd have a self-driving car by 2008? The story waseverywhere. It was supposed be a modified Opel Vectra that would attain speeds of 60 mph and navigate dense traffic. Well, here we are, 2008, no intelligent Vectra in sight. Where's our self-driving car, GM? Huh? Not coming any time soon, I suspect. Tim Lee at Ars Technica has a pretty good overview of all there is to know in self-driving cars, but if you want the condensed version, start with the the 2004 DARPA Grand Challenge. DARPA, the advanced research arm of the Department of Defense, asked AI developers to build a car that could travel 131 miles through the dessert with no human input. That first year, no car made it more than eight miles. But in 2005, five cars survived the trek, including the winner out of Standford Unvesity, a modified Volkswagon Touareg named Stanley. In 2007, DARPA issued a new challenge, to navigate city streets, and six cars succeeded in the task. The winner, a modified Chevy built by engineers from Carnegie Mellon, used cameras, lasers, and radar to build a virtual map of the terrain on the fly. Meanwhile, top level decision making algorithms were deciding strategy, like "stop at the intersection" and "Flip off the cop" while another set of software managed the steering wheel and pedals to actually accomplish those goals in light of the terrain map and other traffic obstacles But there's still so much the cars can't do: identify stop signs, pedestrians, or cone zones, just to name a few, and then there's the problem of managing multiple obstacles at once. That's why the guys who are expert in these cars say we're probably a couple of decades away from telling KITT to go park himself. Not to worry, there are a couple of neat things that have become automated in recent years. Remember those Lexus commercials with the car that parks itself? Those were for real. The driver stll has to manage the breaks and gas, but after lingin up the car for the spot, the car takes over the steering wheel and executes the kind of perfect parrallel park most of us couldn't manage on our driver's tests. And then there's adaptive cruise control that detects when the car is approaching an obstacle and slows down. These are baby steps, to be sure, but as the saying goes, you have to walk before you can get the self-driving car to go pick up the pizza.