Ketamine and Depression: A Breakthrough?

In recent years there has been great research interest in ketamine as an antidepressant. Ketamine, a drug better-known for its use as an anaesthetic (and a recreational drug in lower doses) is claimed to have powerful, rapid-acting antidepressant effects, even in depressed patients who have not responded to more conventional drugs. However, its mechanism of action remains unclear. Now,

in a major new Nature paper

, Baltimore researchers Panos Zanos and colleagues say that ketamine itself is probably not an antidepressant after all. Instead, the antidepressant effects can be attributed to a metabolite of the drug, formed in the body after taking ketamine. The metabolite is called (2S,6S;2R,6R)-HNK. But is this a real breakthrough or a red herring?

Here we show that the metabolism of ( R, S)-ketamine to (2S,6S;2R,6R)-hydroxynorketamine (HNK) is essential for its antidepressant effects, and that the (2R,6R)-HNK enantiomer exerts behavioural, electroencephalographic, electrophysiological and cellular antidepressant-related actions in mice.

So how does HNK do this? Unlike ketamine, HNK is not an NMDA glutamate receptor antagonist. Rather, it acts to promote signalling via the AMPA glutamate receptor. NMDA antagonism is believed to underlie ketamine's anaesthetic and psychoactive (dissociative hallucinogenic) properties. So HNK is not likely to have these undesirable effects, Zanos et al. say, making it more suitable as an antidepressant.

I've been following the ketamine/depression story for nearly a decade and this paper is the most interesting piece of work I've seen. This is a really impressive set of experiments - but they were all in animals. Zanos et al. haven't shown that ketamine's antidepressant effects are mediated by HNK in people; rather they've studied the 'antidepressant-like' effects of ketamine in rodent behavioural models such as the forced swim test

. Bottom line: we don't yet know whether HNK is a human antidepressant. Zanos et al. do claim that HNK correlates with antidepressant effects in humans. They say that

This is a citation to one of their own papers

, from 2012. There's just one problem - as far as I can see that paper didn't find the correlation that Zanos et al. say it did. In the 2012 paper, (2S,6S;2R,6R)-HNK was referred to as HNK4a and, in a study of 67 patients, plasma levels of HNK4a did not differ between clinical responders and non-responders (p = 0.88). In fact, no other ketamine metabolite significantly predicted response, although one (HNK4c) was associated with non-response. 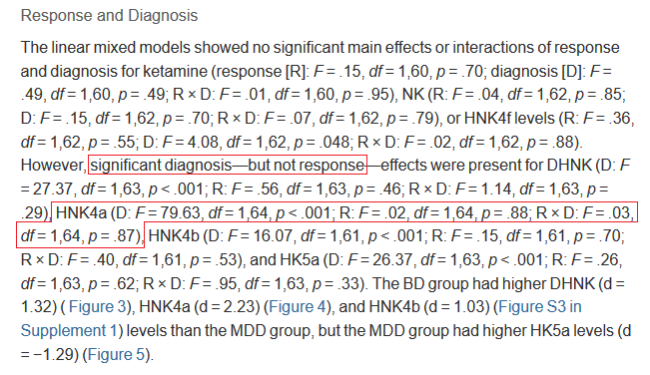 Either I've misread the 2012 paper or Zanos et al. miscited it. If the latter, the only piece of human evidence supporting all the mouse work by Zanos et al. disappears. Of course, this doesn't mean that HNK is not a human antidepressant. So how could we find out? The only definitive way would be a clinical trial of HNK: inject depressed patients with the drug, or placebo, and see what happens. However, getting regulatory approval for such a study, which would technically (as far as I know) be a first-in-man trial of HNK, might take a long time. An alternative approach would be to find some way of blocking the conversion of ketamine into HNK and seeing if this blocks the antidepressant effects in humans. My own suspicion is that the antidepressant effects of ketamine may be driven not by a metabolite but as a kind of psychological

reaction to its pronounced psychoactive effects

. If HNK is non-psychoactive, I predict that it won't turn out to mediate ketamine's antidepressant effects in humans. HNK might nonetheless have some antidepressant activity but not as dramatic as ketamine. Then again I might very well be wrong, and I hope I am, because if Zanos et al. are right, they might just have discovered the next 'miracle' antidepressant.