Is Parkinson's A Prion Disease?

The Journal of Neuroscience recently featured a debate over the hypothesis that Parkinson's disease is, at least in some cases, caused by a prion-like mechanism - misfolded proteins that spread from neuron to neuron. A prion is a protein that has taken on an abnormal shape and that can spread itself by making other, healthy molecules of the same protein adopt its abnormal configuration. The best-known prion disease is variant CJD aka "mad cow disease", but some researchers believe that Parkinson's is also a prion-like disorder. The evidence is reviewed by Patrik Brundin and Ronald Melki in

a Journal of Neuroscience paper

. In an accompanying article, Surmeier et al. put the case that the prion theory can't explain everything about Parkinson's. The journal call this debate format 'Dual Perspectives'. Brundin and Melki argue that there is good evidence suggesting that a protein called alpha-synuclein (α-SYN) can become prion-like, and that this causes at least some Parkinson's cases. α-SYN is produced in large quantities by all neurons. The authors say that a α-SYN misfolding event can occur, by chance, in any neuron, although it seems especially likely to occur in the cells of the olfactory bulb or the vagus nerve. Once the rogue α-SYN exists, it spreads itself from neuron to neuron and thus progressively 'infects' the brain. The disordered α-SYN forms clumpy aggregates called Lewy bodies, and eventually kills neurons, causing the symptoms of Parkinson's. 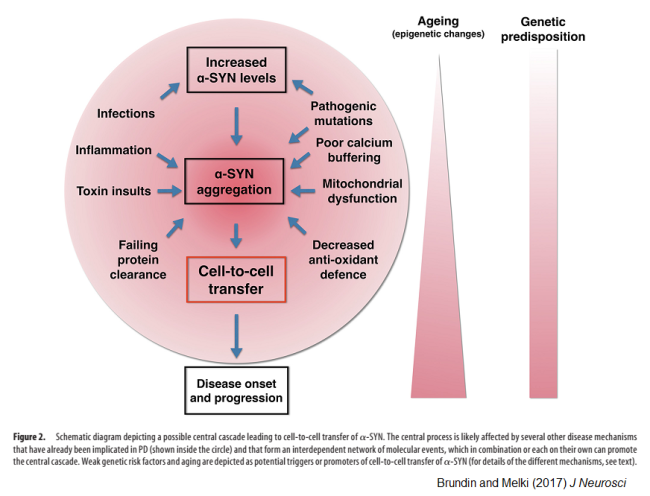 Key evidence for the prion hypothesis, Brundin and Melki say, is the fact that brain tissue from Parkinson's patients can 'transmit' the disease to animals when injected into their brains. What's more, when healthy donor brain cells were grafted into the brain of Parkinson's patients as an experimental treatment, the donor cells sometimes developed Lewy bodies, as if they had been infected by the host brain. In their counterpoint article, Surmeier et al. don't deny the idea that α-SYN can behave like a prion under some conditions. The problem, they say, is that the progression of Lewy bodies through the brain in Parkinson's disease doesn't follow a prion-like pattern. In Parkinson's, one brain area (e.g. the substantia nigra) might show severe Lewy pathology while a nearby area, heavily connected to the first by synapses, shows none at all. Even within a given brain region, some cell types show degeneration (e.g. dopamine neurons) while others are entirely spared (e.g. GABA neurons.) This is hard to reconcile with the simple idea of α-SYN prions spreading like a contagion and causing damage wherever they go. Surmeier et al. conclude that misfolded α-SYN may indeed be involved in Parkinson's, but that it can only cause disease when the conditions are right. Most neurons, they say, are able to recognize and break down any rogue α-SYN, preventing aggregation. However, old age, environmental factors, and genetic risks could all weaken these defences. Substantia nigra dopamine neurons are especially vulnerable, Surmeier et al. say, because of their demanding workload in terms of constant, heavy "pacemaker" firing. In other words, misfolded α-SYN might be harmless in itself, with Parkinson's only arising when the usual defences against it break down. This debate reminds me somewhat of the historical argument over the germ theory of disease. When it was proposed that microscopic germs were the cause of many diseases, there were sceptics. Some said that germ infection was just the symptom of underlying poor health. This 'terrain theory' has echoes in Surmeier et al.'s arguments. Overall, these are both interesting papers and although it was a debate format, both sets of authors seemed fairly close in what they were arguing: that α-SYN prions are involved in Parkinson's, but that some cells are more vulnerable to them than others.