Is "Dendritic Learning" How The Brain Works?

A new paper in ACS Chemical Neuroscience pulls no punches in claiming that most of what we know about the neuroscience of learning is wrong: Dendritic Learning as a Paradigm Shift in Brain Learning According to authors Shira Sardi and colleagues, the prevailing view which is that learning takes place in the synapses is mistaken. Instead, they say, 'dendritic learning' is how brain cells really store information. If a neuron is a tree, the dendrites are the branches, while the synapses are the leaves on the ends of those branches. Here's how Sardi et al. explain their new theory: 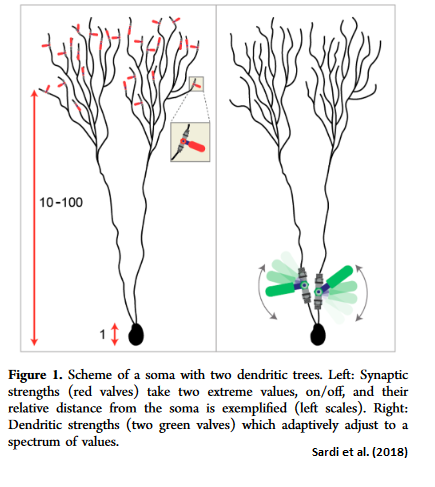 On the left we see the idea of synaptic learning, which proposes that each synapse can independently adjust its strength. On the right, we have dendritic learning, the idea that each neuron only has a small number of adjustable units, corresponding to the main dendritic branches. The evidence for dendritic learning, Sardi et al. say, comes from experiments using cultured neurons in which they found that a) some neurons are more likely to fire when stimulated in certain places, suggesting that dendrites can vary in their excitability and b) that these (presumed) dendritic excitability levels are plastic (they can 'learn'.) Sardi et al. conclude that their new model is nothing less than a Copernican revolution in neuroscience:

Copernicus was the first to articulate loudly that the earth revolves around the sun and not vice versa...“I guess something is wrong”, Copernicus said to himself as he swam against conventional wisdom... "Hebb’s theory [of synaptic learning] that has been so deeply rooted in the scientific world for 70 years seems to be wrong", I have told my students.

Hmm. It's a nice idea, but it's very preliminary and I find it quite hard to believe. For one thing, Sardi et al. have not shown that synaptic learning doesn't happen. At best they have shown that dendritic learning also happens. To me the problem with dendritic learning as an exclusive mechanism of learning is that it leaves each neuron with only two or three 'degrees' of information capacity. A neuron can have thousands of synapses and if they are all independent, that's a lot of potential information storage. Whereas if plasticity is confined to the primary dendrites, this massively reduces the information capacity of each neuron. I'd need to see a lot more evidence to convince me of this, so I don't think Copernicus has returned to earth just yet.