Ink Wants to Form Neurons, and an Artful Scientist Obliges

Since graduating with his PhD in neuroscience last fall, Greg Dunn has continued to spend his days with neurons--big, golden ones 10,000 times the size of neurons in your brain. 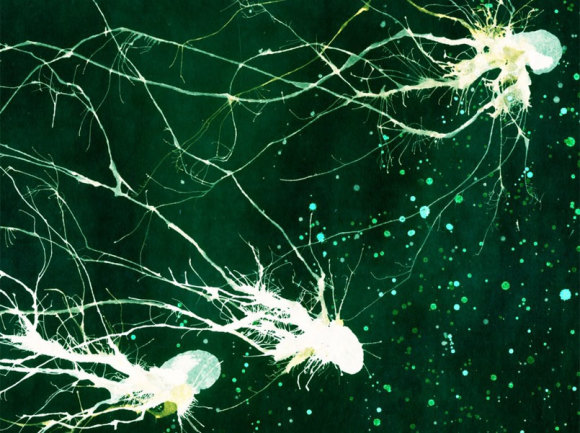 In his second year of neuroscience grad school, Greg Dunn was moonlighting with a different kind of experiment: blowing ink across pieces of paper. The neuron-like pattern it formed was instantly recognizable to him as a neuroscientist. "Ink spreads because it wants to go in the direction of less resistance, and that's probably also the case of when branches grow or neurons grow," he says. "The reason the technique works really well is because it's directly related to how neurons are actually behaving."

Dunn calls this the "fractal solution to the universe," which he sees as the "fundamental beauty of nature." He's fascinated that this branching pattern holds true across orders of magnitude, whether that's nanometers for neurons, centimeters for ink, or meters for a tree branch.

Since graduating with his PhD last fall, Dunn has continued to spend his days with neurons--big, golden ones ten thousand times the size of neurons in your brain. The former University of Pennsylvania grad student now creates paintings of neurons for a living.

An entirely self-taught artist, Dunn began experimenting with art while in graduate school. His Asian-inspired neuron paintings won him commissions at the Society for Neuroscience and many neuroscience departments; one thing led to another, and he eventually traded the lab bench for an artist's studio in an old tobacco warehouse in Philadelphia. But science and lab are literally never out of the picture. 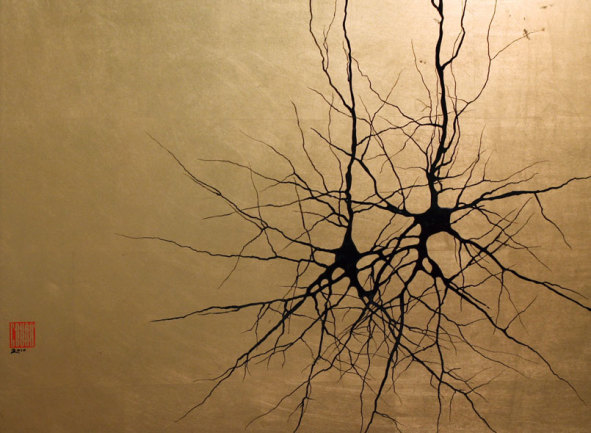 The branching tree motif of Asian art is especially fitting for Dunn's neuron paintings. Simplicity is key: "What I love about Asian art is that you boil away all the unnecessary crap, and you're left with an expression of an idea that's done with spontaneity and grace." There is nothing extraneous here in this painting of two pyramidal cells, a type of neuron found in the cerebellum and hippocampus. 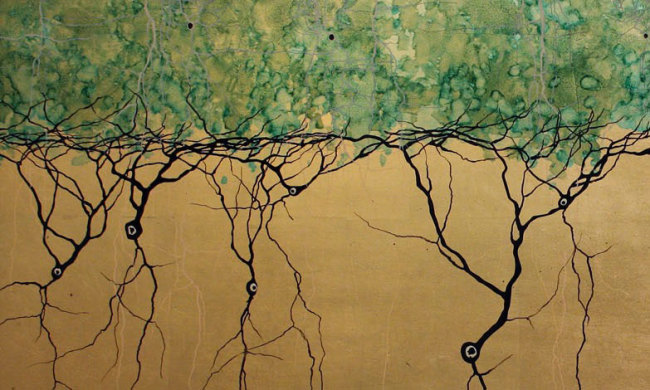 For familiarity and precision, Dunn had taken to using lab supplies in his artwork. He sheepishly admits that he did a bit of an informal exchange with his former lab, trading easily obtainable items for specialized lab supplies of equal monetary value, such as scissors for syringes.

Now that he's no longer working in a lab, getting ahold of the supplies has become a little bit tricky: "You say to the pharmacy, 'Can I get some syringes for my artwork.' They're like 'Yeah, get outta here.'" But the level of precision required in art is nowhere near that for molecular biology--try visualizing 0.2 microliters of fluid--so Dunn is flexible with his equipment these days. 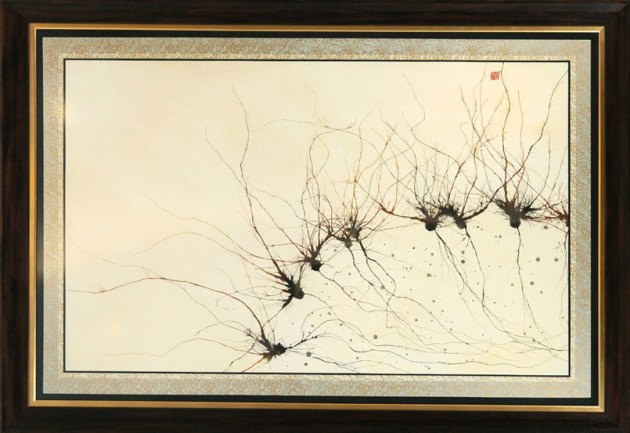 "A permanent billboard in the best location of the universe to advertise my art," says Dunn about his paintings in the Society for Neuroscience's (SfN) D.C. headquarters. He had contacted the group to inquire about exhibiting his work at the SfN's annual meeting, a who's-who of the neuroscience world. Marty Saggesse, now the executive director of the SfN, replied by commissioning Dunn to create two new pieces for the organization's lobby.

This painting of neurons in the cerebellum, a classic neuroscience image, is one in the original commission. "When you're first starting out as an artist, the idea that someone would pay a couple hundred bucks for something that you completely materialized out of thing air is surprising," says Dunn, "So at the time, it was pretty overwhelming to get this commission." 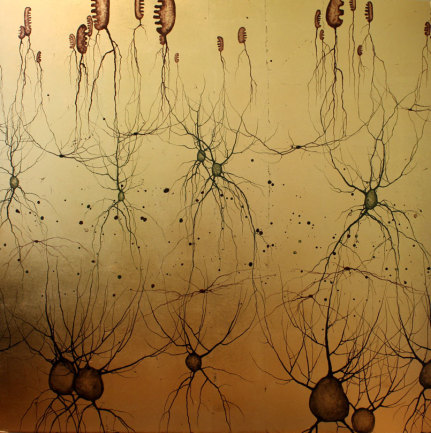 Dunn is currently working on a large commission from Johns Hopkins University. As in any scientific project, he has created a detailed plan for the work: the Johns Hopkins Cortex Painting Protocol, which is taped up on Dunn's wall, meticulously outlines each step of the painting. "The materials are just too damn expensive to experiment in," he says. With all the gold leaf and precious metals in his work, some paintings have as much as $2,000 of materials. A large painting takes weeks to produce. 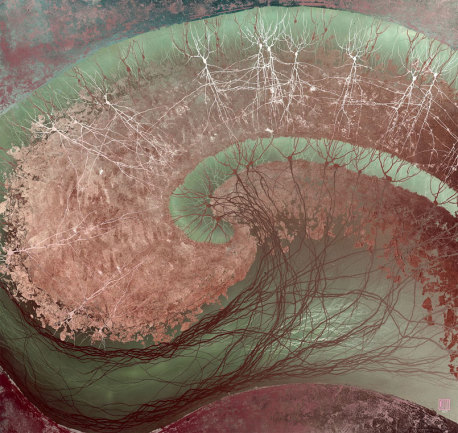 Before he ever touches a brush, Dunn mocks up his paintings in Photoshop, setting the composition and color scheme. Paintings, like a set of experiments, must be planned through in advance. "If the silhouette isn't great, that painting will never be great. You've got to build on a strong foundation," he says. "That's true of science as well."

The curled structure depicted here is the hippocampus, one of the most-studied parts of the brain. It has an integral role in memory and spatial navigation. The famous patient HM, who'd had his hippocampus removed, was unable to form new memories. 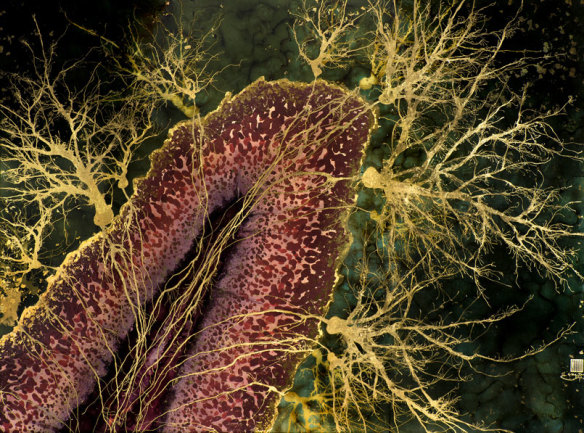 Dunn has been recently been playing with iridescence, adding more colors while still allowing the metals to shine. This painting of the cerebellar lobe is an example of his newer work.

Listening to him explain iridescence, you can see how his scientific background factors into his art: "[Iridescence] is when you have small crystalline patterns at the microscopic level which break up the incoming light and distribute it a different way, and so you get light coming into your eye from different angles in just a planar surface," he explains. Dunn gets his paintings to shimmer and change under different light with a special technique he developed--and which he keeps under his hat. 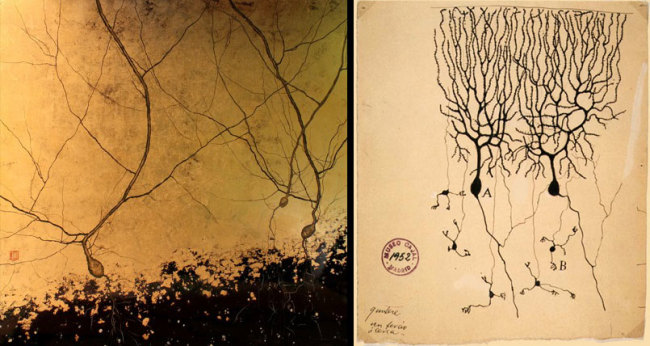 A discussion about art and neuroscience is incomplete without Santiago Ramon y Cajal, whose stunning ink drawings of neurons form the foundation of neuroanatomy. (See DISCOVER's earlier slideshow on Ramon y Cajal's life and work.) Cajal trained as an artist but made his fame as a neuroscientist, winning a Nobel Prize in 1906.

Dunn cites Ramon y Cajal as an inspiration, and his painting of Purkinje cells--large branching neurons in the cerebellum--evokes his predecessor's ink drawings of the same.

To see more of Dunn's work and buy some of it for yourself (with a discount for grad students!), head over to his website. 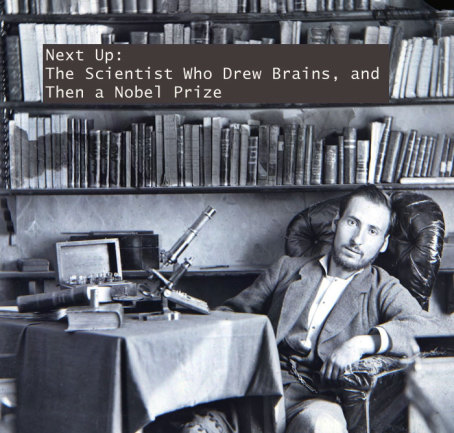