In the Brain, Binge-Drinking and Binge-Eating May Go Hand in Hand 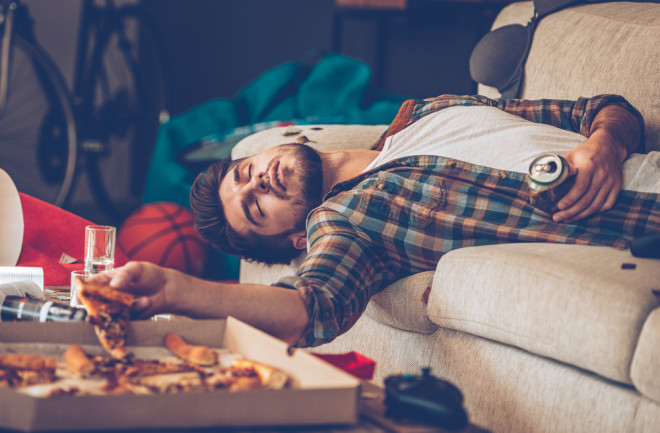 (Credit: g-stockstudio/Shutterstock) After bartenders announce last call, like clockwork, pizza joints and 24-hour diners fill to the brim with drunk revelers. It seems counter-intuitive: Alcohol contains ample calories and the body should recognize it as a source of energy, adjusting our appetites accordingly. This predilection for imbibing and pigging out has been a scientific curiosity for some time now, and researchers have attributed the "drunchies" to our sense of smell, our taste buds or our deactivated social inhibitions. But now, a team of researchers from the Francis Crick Institute and the University College London says a mechanism in the brain deserves a closer look for altering our appetite. Based on findings in mice, they say alcohol directly affects structures in the brain, called AgRP neurons, that regulate ravenous eating. AgRP neurons are typically activated by extreme hunger, but when alcohol flooded the brains of otherwise normal mice, they developed a clear case of the munchies. AgRP neurons are located in the hypothalamus, a region of the brain responsible for regulating thirst and hunger, among other essentials. A previous study showed that manipulating only a small number of these neurons optogenetically "evoked voracious feeding within minutes." The team from Francis Crick and University College wanted to dig deeper. First, the researchers gave mice an amount of alcohol equivalent to a weekend bender, and confirmed that they did indeed eat more than their straight-edge counterparts. Then, they dipped mouse brain slices in ethanol, which caused still-living AgRP neurons to increase calcium production and "light up"— the calcium glowed green under a microscope. Both the calcium production and a spike in electrical activity were indications the neurons were working. To further confirm the link, they blocked AgRP neurons in live mice and gave them alcohol, but this time their appetites didn't kick into a higher gear. They published their research Tuesday in Nature. Previous studies indicated a range of indirect mechanisms linking binge drinking and binge eating. One 2015 study from the Netherlands, for example, found that alcohol causes us to prefer fatty foods, while another from the Indiana University School of Medicine suggested that we're more responsive to the smell of food when we're drunk. Drinking also lowers blood sugar levels, which might cause us to feel hungry. This latest work, however, posits one of the first direct connections between ethanol and overconsumption. So, the next time you're biting into a double cheeseburger at 3 a.m., remember, that in a certain sense, you were starving.