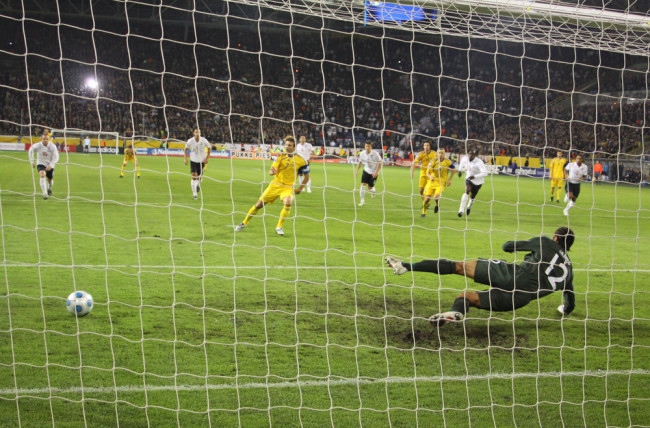 The recently-concluded 2014 World Cup yielded four knockout matches decided by the dreaded penalty shootout, a total reached just two other times in the tournament’s history. Few outcomes in sports are crueler than accepting defeat in such a fashion. But if teams are looking for a leg up in 2018, they’ll want to brush up on an old concept: the gambler’s fallacy, or the false belief that future outcomes will balance out past ones. Cognitive scientists from the University of London analyzed every penalty shootout that occurred in World Cup and UEFA Euro Cup tournaments from 1976 to 2012. They found that goalkeepers were predictably vulnerable to the gambler’s fallacy, but kickers failed to take advantage of this weakness.

The gambler's fallacy can be seen in this example: Take a coin and attempt to predict the outcome of each toss. There’s always a 50-50 chance it’ll land on either heads or tails; but if the coin lands on heads eight times in a row, we tend to assume the streak has to end on the next flip — so we choose tails. This is the gambler’s fallacy. Now what does this have to do with soccer? Guessing outcomes is important in penalty kicks because goalies must dive even before the ball is kicked. Thus, Researchers pored through 36 years of penalty kicks — 361 in total — and denoted the direction of each kick (left or right), as well as the direction the goalie dove. They omitted kicks up the middle, 40 in all, in order to create a binary left-right system that mimicked a coin flip. Then, they tracked the direction a goalie would dive after one, two and three shots fired in the same direction. They found that, with every consecutive kick that was knocked into, say, the left corner, the goalie was more likely to choose the right corner on the next kick. For example, in the 2004 Euro Cup semifinal, Portuguese kickers placed three consecutive shots into the left corner. The goalie dove right on the fourth kick. Of course, the fourth went in on the left. Researchers’ data strongly show that after three consecutive kicks in one direction goalies will demonstrate the gambler’s fallacy by diving the opposite direction. The researchers noted that their trends only apply to penalty shootouts, which happen in rapid succession. Penalty kicks, which are isolated occurrences, aren’t very predictable. They published their findings Thursday in the journal

Players on the field, however, don’t seem to take advantage of goalies’ predictability. In their paper, researchers suggest this may be due to the individualistic nature of taking a penalty shot. Each player takes a shot alone, without much discussion with other players; therefore, they may not be in tune with the patterns of dive and kick direction. The goalies, on the other hand, are involved in each kick so they can recognize patterns, perhaps leading to the gambler’s fallacy. Study authors Patrick Haggard and Erman Misirlisoy suggest goalkeepers remember to randomly generate their dives. Kickers, on the other hand, should communicate more with teammates to take advantage of the gambler’s fallacy. These tips, perhaps, could be what push a team to World Cup glory. But most fans would rather settle the score in regulation time. (Bonus video: all the trends, strategies and cognitive scientists in the world aren’t going to give you an advantage when you launch a penalty kick like this one:)