Running a household takes an emotional and cognitive toll. And when there is imbalance in chores, it can creep into our inner world, creating mental load. 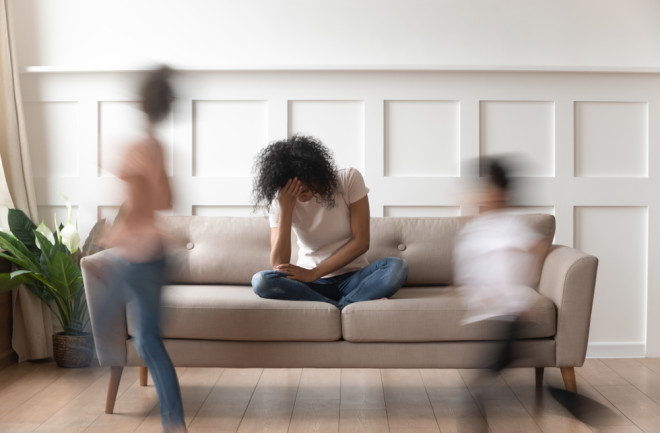 It’s no secret that compared to men, women do more household chores: an estimated three hours more each day, according to a global survey. Among mixed-sex couples, women will bear the brunt of the housework, including instances where both partners have full time jobs and even if the woman works longer hours. And in households that do strike a good balance, men are more likely to do more enjoyable chores, like gardening or entertaining the kids.

But what is less well-documented is how this imbalance creeps into our inner world — the invisible strain that sociologists refer to as mental load, or the cognitive and emotional effort that comes with being the family administrator. (In other words, the person who assumes responsibility for noticing problems, delegating tasks and managing emotions.)  According to Leah Ruppanner, a sociologist at the University of Melbourne, it differs from cognitive labor by carrying emotional weight. It’s more than scheduling and making plans, it’s the background anxiety of being expected to micro-manage everything and keep people happy.

Once you know about mental load, it’s easy to spot. It’s there, for example, when the father drops off his children at a birthday party but still expects his partner to buy and wrap gifts, then remind him what time he needs to collect them. Or when men take responsibility for the laundry, but forget to buy detergent or have clean towels ready for when guests come to stay.

Mental load is an internal process, making it invisible and essentially limitless, says Ruppanner. “You don’t bring your dishes to work. But you take mental load everywhere you go,” she adds. This can impact productivity and prevent women from putting in the physical or mental labor required for promotions and pay rises. The endless cognitive effort might even lead to insomnia or mental health problems.

The reason it usually falls to women to do these things is not because women are naturally better at planning, delegating or multitasking; studies prove men just as capable. Women are just expected to do them more and are judged more harshly when things go wrong.

In a 2019 study, participants were given a photograph of a messy house: Dishes cluttering the dining table, blankets strewn over the floor, chairs untucked. When participants were told that the house belonged to Jennifer, they deemed the house dirtier and its occupant as having lower moral character, than when they believed someone called John lived there. For some of us, a dirty house suggests depravity when it’s owned by a woman but can be dismissed as a harmless mess when it’s attributed to a man.

In her book The Motherhood Complex, journalist Melissa Hogenboom describes how, as a result of taking more time off work after the birth of their first child, she naturally performed the mental work involved in childcare. When she returned to work, she carried the burden as there was no ‘handover’ of these invisible tasks. She couldn’t simply quit her role as project manager for the afternoon.

To make the invisible visible, sociologists have suggested talking openly about internal labor so that all work, both physical and mental, can be divided up more fairly. Rather than assigning individual chores, for example, both partners could take charge of whole areas of responsibility, co-managing family life.  Another option is for women to simply do less, says Ruppanner. This may be painful at first, but in the long-term it could help some men appreciate the behind-the-scenes preparation that previously went unnoticed.

Changes in the workplace including remote or flexible working may alleviate childcare worries during work hours, improving employee wellbeing and boosting productivity, says Ruppanner. Policy changes on childcare subsidies and paternity leave could also help: Men who take more paternity leave assume more responsibilities once both parents are back at work, according to a 2008 study analyzing parental leave in Sweden.

On a societal level, we need to start quantifying mental load in the same way that we measure unpaid physical labor, says Ruppanner. She suggests extending national statistics surveys to ask respondents about time spent organizing family life. Reliable data on how long people are engaged in emotional load, the impact it has on physical and mental health and how the burden is shared among non-heterosexual couples will help policymakers make informed decisions and lay the groundwork for future change.