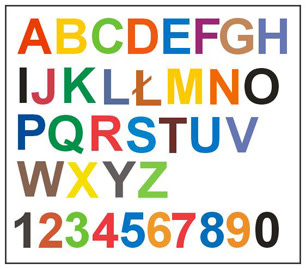 The colors that letters and numbers appear to a synesthete

What's the News: For most of us, our senses stay relatively separate: that is, we hear what we hear and see what we see. People with synesthesia

, however, actually see words as colors, taste a particular flavor when they hear a familiar song, or experience other strong, automatic linkages between senses. The neurological underpinnings of the condition---how the brain connects two usually distinct senses---have remained a mystery. But researchers have now found a possible cause, they reported yesterday

: neurons in the area responsible for the second sensation, such as the color that goes with the word, may be unusually excitable. How the Heck: