Having a third person present during negotiations can keep everything going smoothly. 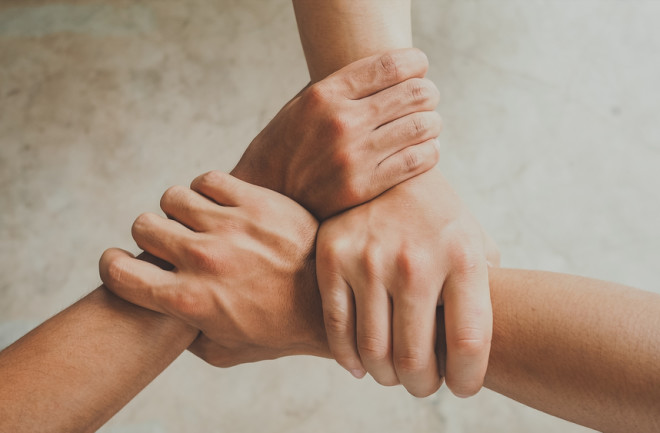 Back in 2008, on a trip to Russia, I got lost. My husband was working at his employer’s Moscow office, and I had gotten off at the wrong bus stop on my way to meet him. With no way to tell him I’d be late, I thought I’d take a taxi. But there were no yellow cabs in sight, and back then, Uber was still just a German word. Hailing one of the city’s gypsy cabs —unmarked, unlicensed cars often driven by people unassociated with any company — seemed like my best bet.

Still, I was wary of hitching a ride with a random stranger. As I spotted another pedestrian with his arm stretched out for passing cars, I had an idea: Maybe I’d be safer getting into a total stranger’s car if this other stranger got in with me.

Sure enough, I arrived on time and unscathed — and my fellow passenger wouldn’t take a ruble from me to split the fare.

I’ve thought of this incident many times in the years since, especially while working on a book about middlemen. Many of us see third parties as extraneous. We’re often eager to cut them out, assuming trade would be quicker and cheaper without an intermediary. That was the promise with the internet, whose connections would, it seemed, enable everyone to communicate and do business directly. But that didn’t really pan out. In fact, middleman businesses like Amazon, Airbnb and Uber wouldn’t even exist without the internet.

And there’s a large body of research pointing to a key role that middleman platforms like these play: keeping both sides honest.

“When people talk about these companies [like Uber and Airbnb], they talk about ‘peer-to-peer’ or ‘sharing economy,’ as if it’s just putting two people together and making them interact,” says Bruno Abrahao, a computer scientist at New York University who has studied how people make decisions on Airbnb. But the platforms do much more, enabling strangers to trust each other, Abrahao points out. “Otherwise, you could just go to Craigslist.”

Social scientists have long known that without information about who’s trustworthy, people tend to favor those who seem similar to them — and this can lead to discrimination. Researchers also have found that having a solid reputation instills a certain degree of trust. But to what degree did someone need a stellar reputation to prevent discrimination? Airbnb and Abrahao’s team of sociologists and data scientists wanted to answer that question.

The researchers conducted an experiment on nearly 9,000 volunteer Airbnb users, forcing them to choose between trusting someone completely similar (for example, another middle-aged woman) and trusting someone different but with a better reputation than anyone else. In the study, published in 2017 in the Proceedings of the National Academy of Sciences, Abrahao’s team showed, among other findings, that seeing even one positive review (compared with none) was enough to offset people’s natural instincts to trust other people similar to them.

That finding explains much of the early success of eBay. The auction website’s feedback system, which lets buyers and sellers rate each other, eased the way for people to send money and goods to strangers from all over the world. Similarly, whenever I step in a rideshare today, I trust the driver to give me a safe ride — even if the driver’s in-app photo makes him look sketchy.

Even when third parties don’t track reputations, they can still create accountability. That’s because these people often have reputations of their own, already known to others to punish wrongdoing. Diego Gambetta, a sociologist at Nuffield College, Oxford, has studied how the Sicilian mafia helps guarantee contracts when a weak government fails to do so. In his classic 1993 book about this research, he summed up the role by quoting a cattle rancher who does occasional business with a butcher. “When the butcher comes to me to buy an animal, he knows that I want to cheat him,” the rancher explained. “But I know that he wants to cheat me.” With such mutual distrust, it seems there’d be no deal at all — so the two men turn to a third, a mafioso named Peppe. “We need Peppe to make us agree. And we both pay Peppe a percentage of the deal.”

How does this tie into my ride in Moscow? Sure, the unlicensed cabbies were unregulated, but it’s not as if my fellow passenger was a known tough guy. Yet having a third party around — even one without a reputation — can affect behavior for the better.

Consider the so-called Trust Game, which social scientists often use in the lab. Usually there are two players, and the first player can send money to the second. And the more trust there is between the players, the more money they can get. For example, if I send you $2, the game will triple that to $6. Now you have $6 and I have nothing. But if you send $3 of that back to me, we’ll each have more than we started with. So, the more I send you, the more I stand to gain by trusting you to send me money back. But you can abuse my trust by keeping more than your share.

Do the Eyes Have It?

Fewer people take advantage of the first player when the experiment introduces a third player who watches over the other two, according to a 2017 paper that examined the effects of adding a third player to the trust game. “As individuals, we want to be good, to do what’s right, but we also have to take care of ourselves,” explains Ernan Haruvy, an economist at the University of Texas at Dallas who co-authored the paper. A third party helps resolve that conflict.

Does Haruvy’s logic explain why I felt safer in Moscow sharing a car with two strangers, rather than just one? Yes and no. Although I wasn’t thinking the driver would want to make a good impression, I did believe a potential criminal wouldn’t want witnesses.

Scientists have hypothesized that people’s concerns with their public image run so deep, even hints of oversight might elicit good behavior. A 2007 experiment had the image of a big-eyed robot named Kismet “watch” participants playing a game in which they could contribute resources to a common pool; a control group played the same game without Kismet. The Kismet group contributed 29 percent more.

Since then, other studies seem to have found similar effects. But Stefanie Northover, a psychology doctoral student at Arizona State University, recently conducted two reviews of such research and is skeptical. In each study she scrutinized, hints of artificial supervision only occasionally elicited good behavior. For example, in some studies, watchful eyes worked on men, not women. Other studies found they improved behavior only when very few people were around. In other words, don’t count on supposed surveillance to protect you.

Human oversight is better, though we can’t rely on the kindness of strangers: Some will give you a free ride, some will charge you for a ride, and others might take you for a ride. But as my Moscow experience reminds me, two strangers are usually better than one.