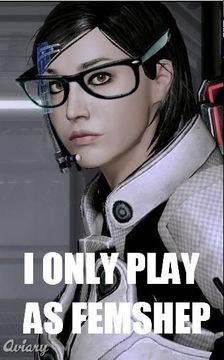 Science fiction knows how to play around with sex and gender. The free-lovin' of A Stranger in A Strange Land, Commander Shepard's bisexual proclivities, and William T. Riker's seemingly universal interspecies compatibility are constant sources of entertainment. And the fun doesn't stop with organic entities. Androids, cyborgs, and robots make gender all the stranger. Why is Data fully functional? Isn't it curious that, of all the characters in Ghost in the Shell the two most heavily cyberized characters, Motoko and Batou, are hyper-feminine and hyper-masculine respectively? And, my favorite: as a robot Bender has no gender, so if Bender bends his gender, what gender does Bender bend? Sci-fi sex is fun to talk about, of course, but how can all of that help us understand the actual future of humanity? Simply put: we imagine what we hope to see. So the question is: what is it we imagine and hope for? An utter free-for-all of alien-cyborg-A.I. bacchanalia? I don't think so. Instead, sci-fi is teaching the diversity of our own human sexuality back to us. Science fiction allows for universes in which we can more easily accept alien forms of gender expression and sexual desire. For example, Ruby Rhod from The Fifth Element is perfectly and outrageously androgynous. In a normal action flick, I suspect Rhod would be a controversial and possibly distracting figure. In science fiction, however, Rhod is just another character caught up in the chaos. Sci-fi lets us explore sexuality free of the cultural and social baggage it carries in the here and now. A big part of removing this baggage is breaking assumptions by destabilizing what we presume are the foundations of gender and sexuality. For example, recently the merry old internet produced hipster Mass Effect. One image caught my eye: "I only play as FemShep." I myself am an avowed Mass Effect fanboy and a vocal defender of playing as a female version of Commander Shepard. Jennifer Hale is just a better voice actor. But I didn't know that when I started Mass Effect for the first time. I simply thought a female Shepard would be more interesting. Why? FemShep is a more interesting character because she plays like a he. In his analysis of "FemShep's Popularity in Mass Effect" James Bishop makes the case clear:

People play as the female version precisely because Commander Shepard is male in all other ways. The lines, the character animations and various other tidbits are male-oriented in a way that makes FemShep more than your stereotypical RPG female protagonist. For one, she wears practical armor. Well, mostly, but it is science fiction after all; we can accept floating visors and the like.

There it is again: sci-fi lets us accept floating visors, so it lets us accept a "male-oriented" female protagonist. The fictional universe provides a buffer for ideas about sex and gender that would normally make us uncomfortable. In fact, FemShep is so engaging because expectations and assumptions of sex and gender are constantly confronted by the character's actual actions and abilities. A key measure of social progress is how accepting we are of different permutations of sexuality. Sexuality can get extremely complex. For those who think it's only male or female, gay or straight, think again. Consider the following possible variables:

Each of these variables is not an either/or situation, but sits on a spectrum. So, if asked to self-identify, the question is not "are you asexual or hypersexual" but, "on a scale of one to ten, one being no sex drive, ten being perpetual, overwhelming sex drive, how would you rate your libido?" And a number in one variable might have no bearing on another. A binary is just not enough – there is a reason the rainbow

is representative of the queer community. Furthermore, some of the categories don't necessarily refer to one thing. For example, the "homo" or "hetero" category uses the terms in their original root-form: are you attracted to a person similar or different than you? In human context, similar or different could refer to biological sex, gender presentation, race, religion, age, ability, education

, or any number of things. Get into sci-fi, and similar and different may refer to species, organic/inorganic, body shape or any number of infinite variables. We may be attracted to some aspects of a person that are the same as us (e.g. biological sex, education and religion) and prefer some aspects be different (e.g. race and gender presentation). In short, we all have some homosexual and some heterosexual tendencies. 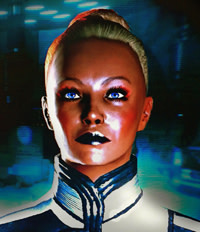 The point is that sci-fi lets us see those variables of attraction and sexuality in action. Even better, sci-fi video games let us experience those variables for ourselves. In the case of my FemShep (pictured, right), I ended up romantic with Liara

in ME1 and with Thane

in ME2. To say I was attracted to a reptilian male alien assassin is bizarre, I admit. But that's what makes sci-fi so wonderful. By playing Mass Effect as FemShep, I was able to understand and empathize with a form of sexual attraction I would never personally have. And that understanding is what science fiction is telling us about the future of sexuality. All of the variables and spectrums and complexities and similarities and differences can be distilled down to one simple equation: consenting persons

love one another for different reasons and in different ways. It also puts our own concepts of "different" into perspective. If you're ok with a human loving a robot, why wouldn't you be ok with a human loving another human? Sci-fi teaches us that the type of persons involved is irrelevant, so long as they are capable of consent and willingly enter into the relationship. So the next time you find yourself laughing at Fry's perpetual struggles to woo Leela or feel confused by whatever your romantic inclinations will be in Mass Effect 3, just remember: that's science fiction expanding your sexual horizons.

Image of hipster femshep via fuckyeahhipstereffect