How Our Brains Set the World Spinning 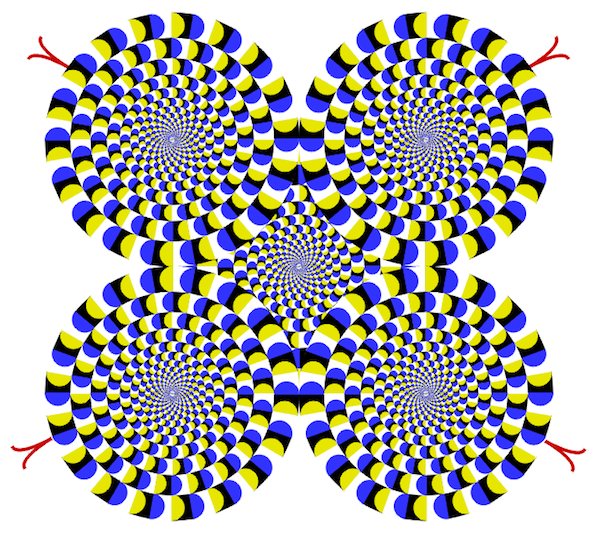 If there's ever excuse to publish an optical illusion as cool as the "Rotating Snakes," I'll take it. This illusion was invented in 2003 by Akiyoshi Kitaoka of Ritsumeikan University in Japan, and ever since, Kitaoka and other scientists have been trying to figure out why it works. A new paper by Stephen Macknik at the Barrow Neurological Institute in Phoenix may have the answer. As you'll notice, the circles seem to rotate in response to where you look at the illusion. So Macknik and his colleagues tracked the movement of people's eyes as they gazed at two of these wheels on a computer screen. Their subjects kept a finger pressed on a button, lifting it whenever they seemed to see the wheels move. Macnick and his colleagues found a tight correlation between the onset of the illusion and a kind of involuntary movement our eyes make, known as microsaccades. Even when we're staring at a still object, our eyes keep darting around. These movements, called microsaccades, help us compensate for a peculiar property of the eye: if we stare at an object for too long, the signals each photoreceptor sends to the brain become weaker. Microsaccades refresh the photoreceptors with a different input and breath new life into our perception. Unfortunately, the jumps of our eyes get in the way of our perception of motion. If we see a snake slithering along in a desert, we don't have to register an entire image of the snake at one instant, then another image at the next instant, and then compare the location of the two images, in order to figure out that the snake is on the move and we might want to jump out of the way. Instead, we only have to sense rapidly changing light patterns in neighboring parts of the eyes. If certain neurons in the vision-processing regions of the brain gets a sudden, strong signal from the eye, they register motion. Normally, our eyes can register motion despite the fact that they are also performing microsaccades. Our brains can tell the difference between a shift brought on by the movement of an object and one brought on by the movement of our own eyes. But thanks to the strong contrasts and shapes in the Rotating Snakes Illusion, we get mixed up. Our motion sensors switch on, and the snakes start to slither. Reference: "Microsaccades and Blinks Trigger Illusory Rotation in the 'Rotating Snakes” Illusion.' Otero-Millan et al, The Journal of Neuroscience, April 25, 2012 • 32(17):6043– 6051 [Image: From Akitaoka's snake web site. Many more big screen versions there!] [Update: I revised this post to correct the explanation of microsaccades and their function. Thanks to John Kubie for his comments and follow-up emails.]