How Ditching My Smartphone Let Me Recharge and Reconnect

Smartphone addiction is real. One woman puts hers down for a week to see what happens. 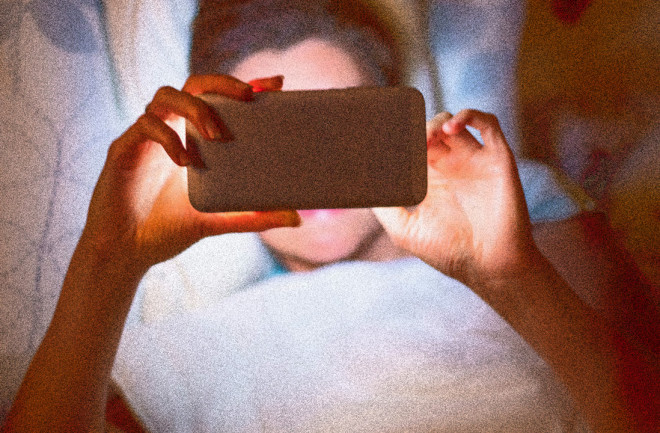 Like many Americans, my cellphone is with me 24/7 — in the car, on my morning run, and yes, in the bathroom. I use it to check on my family, stay on top of my kids’ activities and navigate from point A to point B, among other things.

But more and more, I’ve noticed that I also turn to my phone to fill what might otherwise be a quiet moment. Instead of letting my busy mind wander, I scroll through social media sites, check email and watch YouTube clips. I’m even guilty of sending texts while sitting at a stoplight or in heavy traffic.

I’m not alone. According to the U.S. Department of Transportation’s 2015 National Survey on Distracted Driving Attitudes and Behaviors, 42 percent of adults reported answering calls while driving — and that doesn’t include people who are texting or on social media. Walking is problematic, too. A 2013 study published in Accident Analysis & Prevention reported a noticeable increase in phone-related pedestrian injuries since 2004. People strolled into traffic, collided with poles and even walked straight off a bridge.

It seems like so much of the world is looking down, myself included. And I can’t help but wonder if the constant barrage of information and notifications is boggling my mind and botching my emotions.

Why can’t I stop? And what would happen if I tried?

A quick review of the latest scientific literature suggests that my relationship with my phone is like any other addiction.

The human brain is wired to crave instant gratification, a fast pace and unpredictability, according to David Greenfield, an assistant clinical professor of psychiatry at the University of Connecticut School of Medicine. Smartphones flood the brain with all three, and the brain responds by releasing the feel-good chemical dopamine.

On top of all that, smartphones are usually our primary source of notifications — and that’s a game changer.

“Notifications let you know that a reward is potentially waiting for you,” says Greenfield, who is also the founder and chief medical officer of an organization called the Center for Internet and Technology Addiction. “That anticipated reward elevates dopamine at twice the level of an actual reward. And the [random] reinforcement elevates dopamine in an unpredictable way, just like a slot machine. That’s what makes it so compelling.”

Social media platforms like Facebook, Snapchat and Instagram actively target the brain’s limbic system, which is involved in things like reward, survival and social approval. It’s also sensitive to dopamine. The dopamine dump you get from your smartphone drives you back to your device, over and over again, sometimes without you even realizing.

A Drain on the Brain

The craving for smartphone access has even earned a spot in the medical lexicon: smartphone dependence, or SPD. That craving isn’t just addictive — it also affects our health, our ability to think, our relationships, even our emotional well-being.

The consequences can be serious. A 2017 study published in Clinical Psychological Science showed that teens who used screens for three or more hours each day were 34 percent more likely to consider, plan or unsuccessfully attempt suicide than those who spent less time on their devices.

Although my smartphone’s effects on me weren’t as extreme as what researchers saw in that study, I noticed that my online activities seemed to take precedence over more healthful pursuits. Instead of meditating for 10 minutes before bed each night, I hit Pinterest, stimulating my tired mind and delaying my bedtime by a good 30 minutes. That’s right in line with findings from a 2016 Frontiers in Psychiatry study linking smartphone use with anxiety, depression, stress and poor sleep quality.

Smartphones tap into our brains' reward circuitry, including part of the limbic system, boosting production of the neurotransmitter dopamine, a key player in addiction. (Credit: Alison Mackey/Discover)

That link likely exists because of the constant feed of information. Typically, stress hormones like adrenaline and cortisol spike if, say, we’re running away from a tiger. Once the chase is over, those hormone levels eventually fall back to baseline. But the near-constant pressure to stay dialed-in and manage multiple channels of information on our phones leads to a steady drumbeat of the hormones, keeping their levels higher than usual.

What’s worse, when I was fixed on my smartphone, it hogged all of my brain’s executive pathways, which I needed to carry out complex tasks like organization and planning. With so many bells, whistles and emojis competing for my attention, I had to work harder to focus.

“The mere attempt to simultaneously balance our attention between competing stimuli leads to less efficient information processing,” says media psychologist Nancy Cheever of California State University, Dominguez Hills. “You get stressed. You get nervous. You can’t concentrate, and you might have diminished reaction times or even memory loss.”

Indeed, studies suggest that young adults with SPD have significantly more microstructural damage to the white matter in their brains. In other words, the brain’s wires — which normally allow different regions to communicate with each other — become crossed. Observational data, too, suggests we can’t stay on task even when we’re already doing something else on our phones. A 2012 study found that an unintended interruption from an app can delay task completion in the original app by up to 400 percent.

But not only was my smartphone making it harder for me to stay focused — it never left me alone with my thoughts. The constant flood of stuff was also hijacking my ability to enjoy real conversation with my family. When I went to dinner one night with my mom and two sisters, all three women began to scroll through their phones the minute we sat down. I was “phubbed” — phone snubbed — by my own family.

As they tapped, touched and swiped, I felt left out. Lonely. Yet I was guilty of the same thing. Even while playing with my kids, I felt compelled to take a peek whenever my phone chimed. The mental gymnastics already required to navigate the world — on top of paying attention to my constant digital companion — was wearing me down. So I decided to turn off my smartphone for a week.

The Sounds of Silence

I figured my little social experiment might be tough. But within hours of ditching my device, I realized going sans phone would also be logistically challenging. Almost every detail of my life was in that device. Appointment confirmations of all types arrive by text. I had to call, via landline, to say, “I’ll be there!” I couldn’t text my husband to pick up apples on his way home. And I couldn’t sign in to Amazon without access to a security code the company sends to my phone.

While this was frustrating for me, it was maddening for my family. My husband wanted to know what I needed from the grocery store without having to silence all three kids to have a phone conversation. My kids wanted to know why their bottle of bubble bath hadn’t arrived at our doorstep. And my mom didn’t want to wait until I was back at home to sing me “Happy Birthday.”

Ditching my device was affecting my life outside of my family, too. In the absence of social media reminders, I missed at least half a dozen friends’ birthdays. And if I wanted to catch a movie, I couldn’t buy my ticket ahead of time unless I hopped onto my laptop. I was experiencing what some researchers call nomophobia, fear of being without a mobile device (or No-Mobile-Phobia).

A 2017 study published in the Journal of Clinical & Diagnostic Research reported that nearly one-quarter of those surveyed suffered from nomophobia. And a 2015 study found that people not only performed worse on mental tasks when they weren’t allowed to answer their ringing phones, they also suffered physiological fallout, including spiked heart rate and blood pressure.

My withdrawal period was intense, and the logistics of being away from my phone were challenging. But amid that inconvenience, something happened: There was silence.

I found myself in the zone at work. I played with my kids at the park with newfound enthusiasm. And I was mentally present in my experiences instead of wondering what was happening on Facebook.

“It’s in the moments when we turn away from the object of attention that our greatest brilliance and creativity and problem-solving happens,” says Nancy Colier, psychotherapist and author of The Power of Off: The Mindful Way to Stay Sane in a Virtual World. “That’s when [we] reset.”

After a week without my phone, I was ready for a permanent fix. I wasn’t willing to ditch it altogether; after all, smartphones really are fantastic devices, especially in emergencies. But I’ve disabled notifications and deleted addictive apps like Twitter, Facebook and Instagram. Perhaps more important, I decided to focus on being present in my life rather than looking down.

Amy Paturel is a health and science writer in Murrieta, California. Follow her on Twitter @amypaturel. This story originally appeared in print as "Digital Detox."