How Breathing Links Mind and Body 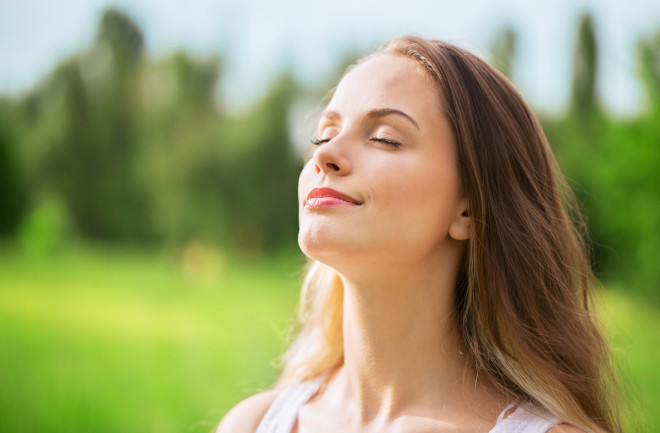 (Credit: Billion Photos/Shutterstock) Whether it’s regulating a burst of anger or calming down a bout of anxiety, taking a deep breath can have a potent effect. There are compelling hints that controlled breathing can improve overall physical wellbeing, but the neurophysiology — the link between our minds and bodies — of controlled breathing hasn’t been very extensively researched. A new study from researchers at Northwestern University and the Hofstra Northwell School of Medicine begins to delve into the topic by attempting to separate the mechanisms that govern controlled and automatic breathing in the brain. Much of the neurophysiological research into breathing has has focused on the brain stem, the researchers say, which controls automatic processes like our heart rate and blood pressure. That work only captures breathing that’s done reflexively, though. Because we have the ability to take control of our breathing rate, other areas of the brain must be involved as well.

So, to find out how our brains behaved when we get in the driver’s seat and take control of our breathing, the researchers studied patients using intracranial electroencephalography (iEEG). They published their work in the Journal of Neurophysiology. You’ve probably heard of an EEG machine — they measure changes in electric currents inside the brain to give researchers an idea of what brain regions are active at any given time. They rely on electrodes places on the scalp to do this, and because they’re outside the brain, there’s some fuzziness to the data. An iEEG relies on the same concept, but it gathers data from electrodes placed inside of the brain, making it much more accurate. These electrodes are sometimes implanted in people with severe forms of epilepsy as a form of treatment, and the Northwestern researchers drew their subjects from among these patients. To establish a baseline of uncontrolled, normal breathing, the subjects’ breathing was measured while performing a task requiring sustained attention on a computer. The goal was to get patient’s attention away from their breathing and let the brain stem take over. Once this was established, the researchers looked at two types of non-automatic breathing: sped-up breathing and focused breathing. When asked to accelerate their pace of breathing, the researchers say, the subjects experienced more brain activity in the amygdala. It’s an area of the brain usually associated with emotional behavior, and decision-making. The sped-up breathing could be simulating anxiety states, they think, and voluntarily increasing the rate could be triggering mechanisms similar to those activated by anxiety.

On the opposite end of the neurophysiological spectrum, controlled breathing is often used to calm anxiety and stress. To call subjects’ attention to their own breathing, the researchers asked them to count how many breaths they took over multiple two-minute periods. Notably, the study only factored in data from when the subjects accurately counted their breaths over the span of the two-minute period. When the subjects did not count correctly, their brain patterns were similar to when their breathing patterns were at rest. But when the subjects focused completely on their breathing to accomplish accurate counts, they seemed to tap into far different regions of the brain. This included the hippocampus and insula — both regions that are related to emotion — as well as the anterior cingulate cortex, which plays a role in the modulation of blood pressure and heart rate.

The work is preliminary, and we can’t draw too many inferences about how breathing is actually connected to cognition yet, but it’s a start. The researchers finding align with other studies that have found signs of activity in these same brain regions, and add to the evidence that areas of the brain linked to higher forms of cognition are also involved with some types of breathing. Therapeutic breathing practices have used control and awareness of breathing for millennia, despite little evidence for or understanding of the underlying neural mechanisms. Studies like this provide a compelling scientific background for controlled breathing exercises. Such information could be beneficial for everyone from yoga instructors to professional athletes to therapists — but there’s plenty of research left to be done. For now, just kick back, relax and take a deep breath.