You're just about to put your hand on the hob of your electric cooker, when you remember that it was on full blast until five minutes ago, and will still be scalding hot. You try to stop yourself - but will you succeed? This kind of 'stop!' scenario is the subject of some most interesting work by Ann Arbor neuroscientists Robert Schmidt and colleagues: Canceling actions involves a race between basal ganglia pathways Stop intentions may or may not succeed. Psychologists study these using 'stop-signal' tasks in which, for example, you must press a button whenever you hear a 'go' signal, unless it is followed by a 'stop' signal.

Stop-signal task performance is well described by theoretical models in which the Go and Stop cues respectively initiate stochastic go and stop processes that race for completion. The outcome of this race condition determines whether stopping is successful.

Until now however, this 'race' has been purely conceptual. Schmidt et al present data showing that a physical race between two neural pathways is at work. Lab rats were trained on a stop-signal task. They had to move their nose (or not move it, on stop trials) in response to sounds, in order to get food. Meanwhile, electrodes were recording neural activity in a number of brain areas: here's Schmidt et al's cartoon diagram of the relevant circuitry. 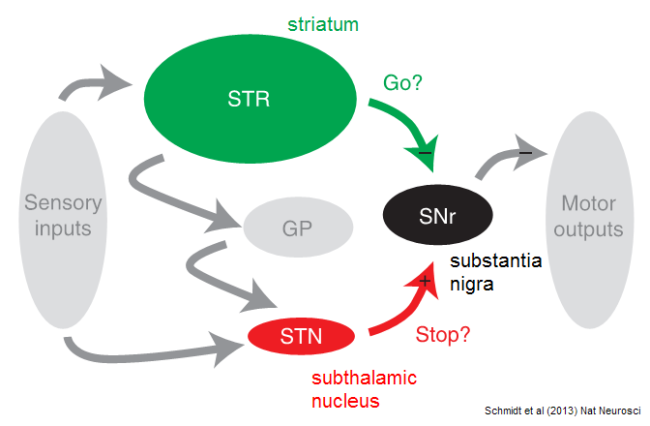 It turned out that, in response to 'stop' signals, activity in the subthalamic nucleus (STN) spiked up. However, this happened regardess of whether the rat succesfully avoided moving. In the substantia nigra (SNr), however, activation in response to the 'stop' signal only happened on trials where the animal ended up not moving. In other words, on failed stop trials, the brain's 'stop' command went missing, somewhere in the post between the STN and the SNr. It was sent, but not read. Why? Because another area, the striatum, got there first. The striatum, responsible for relaying 'go' signals, projects to the SNr but it uses GABA, an inhibitory neurotransmitter which is able to, in essence, block out the 'stop' signals, but only if it gets there first. Further analysis revealed that when the striatal response to the initial 'go' beep was fast, this corresponded to a fast movement but also to a failed stop signal (if there was one). Slower striatal responses, however, corresponded to slow responses and succesful stops. Being slow, they were not fast enough to out-race the stop signal (if any). The strength of the striatal 'go' response was quite irrelevant - it was all about the timing. And the differences were of the order of 1/10th of a second: 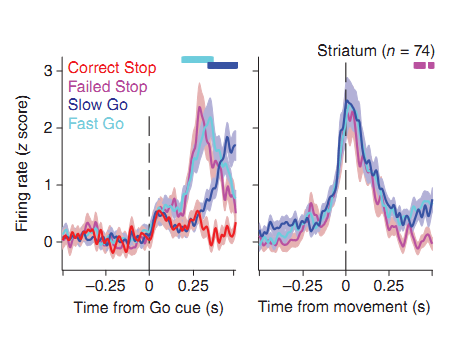 The speed of the stop signals was very reliable. What varied from trial to trial was time it took for the 'go' signal. But why? It's curious because the 'go' beep was always the same. So was the response required of the rat. Why did the rat's striatum sometimes take longer to do the exact same task? The speed of signal transmission in nerve cells is fixed by the laws of physics - so that's not a likely explanation. The striatum's inconsistent timing must arise at a higher level of organization.