How Advertisers Seduce Our Subconscious

You don't even have to remember an ad for it to affect you. 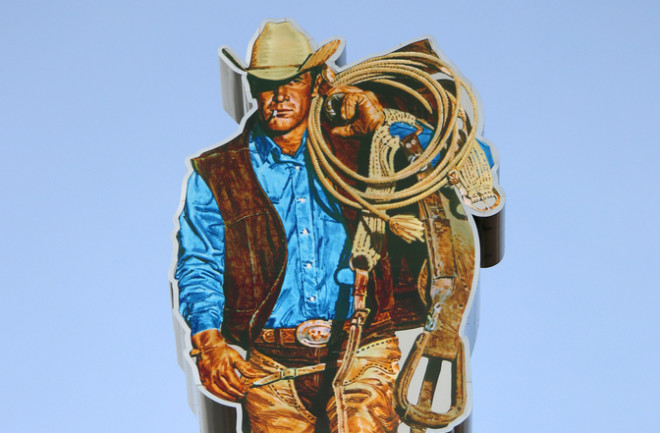 The Marlboro Man as depicted in an advertisement in Berlin, Germany. (Credit: 360b/Shutterstock)

In 1957 Vance Packard’s book The Hidden Persuaders shocked the world by revealing that messages exposed subliminally, below our level of perception, were able to increase sales of ice cream and Coke. The experiment he cited was later shown to be a hoax, but one of Packard’s other assertions, that advertising can influence us below our level of awareness, is absolutely true.

In fact, rather scarily, the vast majority of advertising’s influence on us is subconscious. My own research has shown how the emotive content of advertising enables it to break almost all the rules which we believe govern our own susceptibility to adverts.

For example, we believe that ignoring ads stops them working, oblivious of the fact that emotive content requires no attention at all in order to be effectively processed. We also think that if we can’t recall an advert’s message, we cannot have been influenced by it. However the truth is that emotional influence lodges deep in our subconscious and is almost impossible to recall.

Above all, we believe that our brand choices are logical, and driven by our rational thinking, whereas the greatest driver of brand decisions is actually our emotional predisposition.

Consider this example. In 2001 the struggling communications network, Cellnet, was relaunched as O2 using a campaign with the vacuous message ‘O2: see what you can do.’ The advert featured blue water with bubbles bubbling through it, people flirting and floating around, fluttering doves, a dog catching a ball, and some lilting music in the background.

There was absolutely no mention of the network quality or coverage or tariffs or handsets, because O2 was no better than anyone else on these. Yet despite being a failing brand, and having absolutely no performance advantage, O2 went from last to first in the market in just four years.

More importantly, an industry analysis of this launch concluded their success was entirely due to the ads, which had encouraged people to feel that O2 was “calm and serene, the antithesis to clutter and chaos, a contrast to the often frenetic world around mobile phones”.

How can advertising do this? It’s very simple. Our brains have a primitive defense mechanism called the limbic system, which is permanently alert, perceiving stimuli and assigning meanings to them. It is this system which wakes us if our baby cries, or makes us jump back onto the pavement if we see an approaching car in the corner of our eye.

The limbic system works regardless of whether we are paying attention, and works at a far greater speed than our thoughts. And unfortunately for our consumer selves, it is the system that processes emotional stimulus.

So when we perceive an ad for a brand, we make an instant judgement of its emotional value and store this subconsciously as a marker for future reference. If the emotional value is positive (kind, warm, sexy, cool, successful and so on) we are subconsciously “conditioned” to invest the brand with this positivity. We are not aware this happens, which means we can’t argue against it. But when we come to making a decision involving the brand, we find ourselves “seduced” in favor of it, and provided there is no strong reason not to, we buy it.

Of course if someone then asks us why we bought it, we invent all sorts of rational reasons for ourselves to do with price, features, performance, of the item in question.

In the last 10 years I’ve conducted several experiments which prove this is what happens. In 2005 I showed that ad recall doesn’t correlate with ad effectiveness; in 2006 I discovered that the message in advertising has hardly any influence on brand favorability, which is driven almost entirely by emotive content; and in 2009 I demonstrated that ads high in emotive content, despite being shown to be consistently more effective, are invariably paid less attention than ads with evident messages.

Why is this? Well, we tend to like ads that are emotive and creative, and so we don’t see them as a threat. Because they are not a threat we don’t feel the need to pay attention, and because emotion operates subconsciously, paying less attention actually makes the ad even more effective.

But perhaps the best example of subconscious seduction came from a famous advert which had no message whatsoever, didn’t even show the product, yet managed to achieve a 10% increase in sales across the firm’s entire range. That’s millions of chocolate bars sold to customers — all subconsciously seduced by a gorilla playing the drums.

Robert George Heath is Associate Professor of Advertising Theory at the University of Bath. This article was originally published on The Conversation. Read the original article.