How a Good Run Could Help Repair the Brain 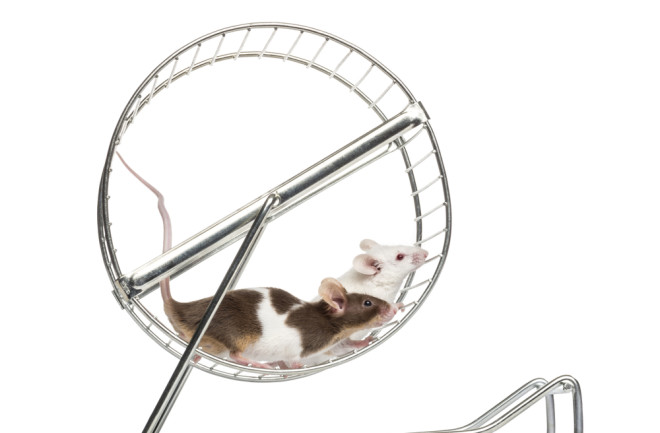 (Credit: Eric Isselee/Shutterstock) The more the mice ran, the longer they lived. Researchers from the University of Ottawa and Ottawa Hospital have discovered that compounds produced during exercise helped brain-damaged mice significantly extend their lifespans. They identified a key protein that they say likely makes all the difference, and their findings could help pinpoint therapies for degenerative neurological conditions like multiple sclerosis (MS).

Running for Their Lives

The mental benefits of exercise have been studied in depth, and go far beyond a clear head and a shot of endorphins. Regular exercise has been shown to prompt the process of neurogenesis, or the creation of new neurons in the brain, as well as help with depression and conditions like ADHD. Here, the researchers were looking at a specific neural structures, the myelin sheaths that encapsulate and protect our neurons. Diseases like MS gradually eat away at the myelin, causing a progressive loss of function. The researchers worked with modified mice with abnormally small cerebellums, a condition that normally killed them within a few weeks. When the mice were given exercise wheels and allowed to run as much as they wanted to, however, their lifespans mirrored that of normal mice The running mice lived up to a year, about normal for a mouse, despite having a shrunken cerebellum. It seems that running was no permanent fix for the mice though — if they stopped running, they died within a few months.The researchers published their study in the journal Cell Reports.

Running won't always drastically expand our lifespans. But the study points to a possible mechanism to fight diseases that break down the connections in our brains, such as Alzheimer's. The key, the researchers say, is the chemical cocktail that floods our brains after a good workout. They identified a specific protein, VGF, that was likely at play in this case. VGF is released after we exercise, and it had been found to have some antidepressant properties. Based on their findings, the researchers say that VGF also promotes the regrowth of myelin in our nervous system. Looking at the mouse brains before and after they exercised, the researchers found evidence that glial cells, which form the myelin sheath, were growing and being strengthened. Paired with the observation that the running mice lived much longer, this study suggests that strengthening and maintaining the insulation around our neurons can have important effects on our mental health. The researchers also directly injected VGF into mice, and found that the effects were the same, indicating that it wasn't some other aspect of exercise at play here. Humans produce VGF just like mice do, and although the researchers haven't yet tried their experiment in humans, the protein could be a step toward creating a cure for diseases that attack the myelin in our brains. For now, perhaps it's just a reminder to exercise more.