How a Deaf Brain Is Rewired to Boost Vision 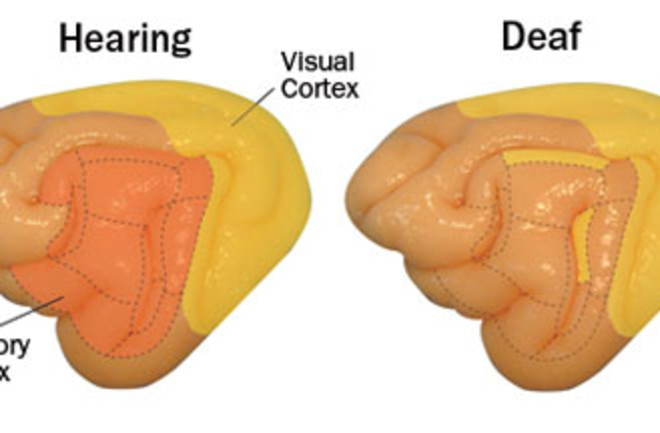 A brain is a terrible thing to waste--and your brain knows that. A new study of congenitally deaf cats has shown that some parts of their brains which would typically work on hearing are repurposed, and instead help out with vision. As a result of that clever efficiency, these deaf cats have superior peripheral vision and motion-detection abilities than cats with normal hearing. Researchers say the human brain may perform the same trick.

For years, researchers have known that deaf people often have superior peripheral vision and motion detection, but just how the brain creates these advantages was unclear. “Over the years, we’ve speculated about how these changes might be taking place,” says neuroscientist Helen Neville of the University of Oregon in Eugene, but a clear cause has been elusive. [Science News]

For the study, published in Nature Neuroscience

, the researchers first determined that the deaf cats had augmented peripheral vision and motion-detection abilities, and then set out to find out why. They used a tiny cooling device that temporarily deactivates very specific parts of the brain.

The scientists found that when they cooled the part of the deaf cats' auditory cortex involved in peripheral hearing, the animals lost their peripheral vision advantage. Likewise, when the scientists deactivated the part of the brain normally involved in discerning which direction a sound was coming from, the deaf animals fared no better than normal cats in visually detecting motion. [National Geographic News]

The results show that parts of the auditory cortex have been pulled into the visual processing system, but the researchers can't yet say whether the brain rewiring of these congenitally deaf cats took place in the womb or during development. Since the brain loses plasticity as it ages, it's not clear if the brains of people who lose their hearing in the course of their lives can make similar compensations. It certainly is a useful trick, though.

Dr Stephen Lomber, who led the research, said: "The brain is very efficient, and doesn't let unused space go to waste. The brain wants to compensate for the lost sense with enhancements that are beneficial. For example, if you're deaf, you would benefit by seeing a car coming far off in your peripheral vision, because you can't hear that car approaching from the side -- the same with being [able] to more accurately detect how fast something is moving." [BBC News]

80beats: The Part of the Brain That Lets the Blind See Without Seeing

tells of deaf Bedouin children who created a completely new sign language Image: Amee J. McMillan. The brain diagram on right shows the slivers of the auditory cortex (in yellow) that are involved in vision processing.