Claims that children with autism have abnormal brain white matter connections may just reflect the fact that they move about more during their MRI scans. So say a team of Harvard and MIT neuroscientists, including Nancy "Voodoo Correlations" Kanwisher, in a new paper: Spurious group differences due to head motion in a diffusion MRI study. Essentially, the authors show how head movement during a diffusion tensor imaging (DTI) scan causes apparant differences in the integrity of white matter tracts, like these ones: 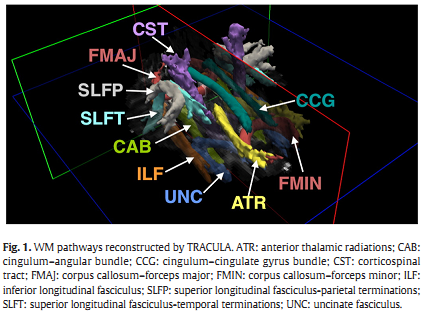 In comparisons of two randomized groups of healthy children - in whom no white matter differences ought to appear - spurious effects were seen whenever one group moved more than the other: 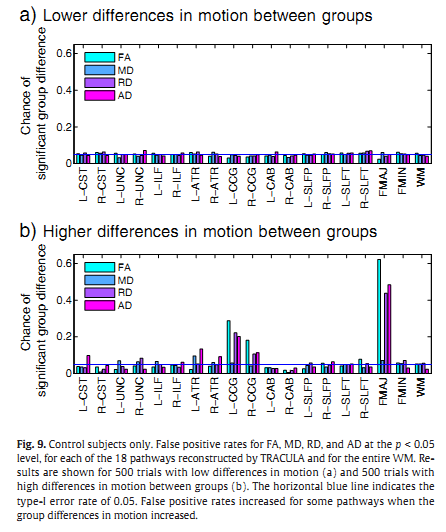 As for autism, the authors found that kids with autism moved more, on average, than controls, and that matching the two groups by motion reduced the magnitude of the group differences in white matter (though many remained significant). Technically, the motion-related differences manifested as increases in RD and reductions in FA; these were localized:

The pathways that exhibited the most substantial motion-induced group differences in our data were the corpus callosum and the cingulum bundle. Perhaps this is related to their proximity to non-brain voxels (such as the ventricles) ... deeper brain areas appear to be more affected than more superﬁcial ones, thus distance from the head coils may also be a factor.

The good news is that there's a simple fix: entering the motion parameters, extracted from the DTI data itself, as a covariate in the analysis. The authors show that this is extremely effective. The bad news is that most researchers don't do this. Attentive readers might remember that the motion issue has already been raised in an autism context in regards to functional connectivity (in fact I believe that I was the first person to put this concern in writing.) This time it's about structural connections. But autism isn't the only disorder where this might be an issue. My working assumption is that every 'disease' group moves more than every 'healthy' group - until proven otherwise.