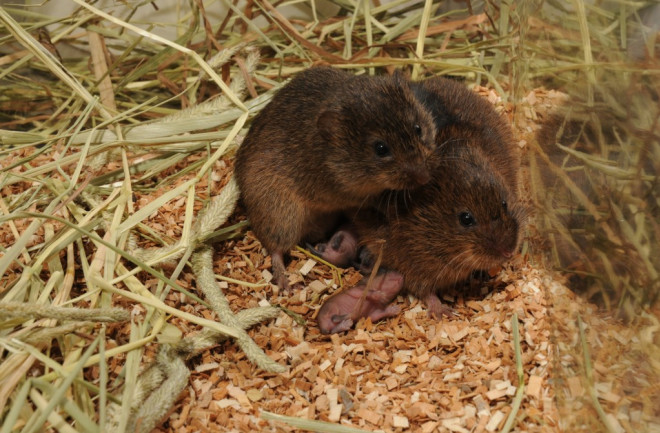 Male and female prairie voles develop strong partner preference after mating and stay together for life. Photo: Zuoxin Wang Is it a coincidence that the word vole is an anagram of love? Probably so, but since prairie voles mate for life, they have since been designated as the unofficial species used to study monogamy in lab animals. And a new study finds that their rare partnerships are cemented by chemical changes on their genes, called epigenetic changes, that result from their sexual encounters. When a prairie vole (Microtus ochrogaster) finds a mate, the two form a strong bond. Not only do they stay together for life and share child care duties, but the lovers will guard their mates aggressively against voles of the opposite sex. Scientists knew from previous studies that this bonding was regulated by neurotransmitters---chemical communicators in the brain such as oxytocin, which is linked to sex and reproduction, and vasopressin, associated with social recognition. However researchers were unsure what the biological basis was for such a sharp behavioral shift after mating. To find out, scientists at Florida State University paired up virgin male and female voles and gave the couples a cage together for a number of hours. Some couples were allowed to mate while others were prevented from doing so. The non-mating female voles instead received drug injections in the nucleus accumbens, a part of the brain's pleasure center. The drugs affected the voles' epigenetics by unwinding their DNA so that genes for vasopressin and oxytocin receptors were more highly transcribed. When the team looked in the voles' brains, they found that in both groups, expression of the genes for these neurotransmitter receptors had been ramped up, and this had affected the animals' behavior. The animals allowed to mate had more receptors after mating, as did those given the drug. In response to the combination of drugs and cohabitation, the virgin females snuggled up to the males in their cages as if the two had mated together before. Thus epigenetic effects brought on by mating appear to unwind key bits of voles' DNA to let more of these pleasure genes get transcribed---reinforcing the attachment between them. These changes are physical and permanent in the voles' brains. The results, published in Nature Neuroscience today, provide the first direct evidence of the link between epigenetics and monogamous bonding in voles. The results could have implications for other types of neurotransmitter-related behaviors or for bonding in other apparently monogamous species, like humans. Just don't expect a love drug for your significant other anytime soon.