Gulf War Illness Leaves a Mark on the Brain

The mysterious malady known as Gulf War illness causes structural changes in the brain. Can it be cured? 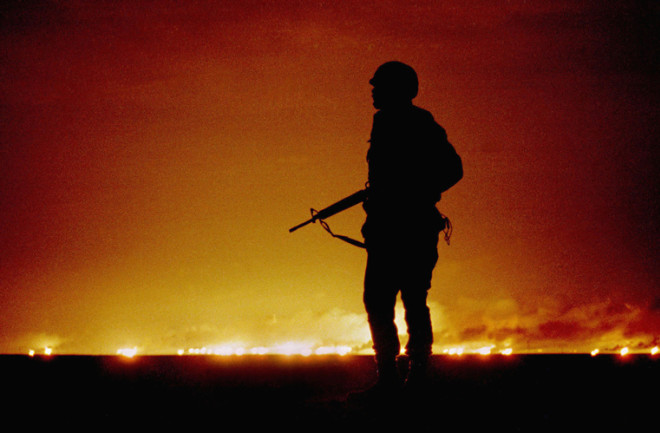 An American soldier watches oil wells sabotaged by departing Iraqi forces burn in Kuwait at the close of the Persian Gulf War. Exposure to toxic chemicals may be to blame for Gulf War illness. (Andy Clark/Reuters/Corbis)

Carolyn Kroot was an energetic and ambitious National Guard member when she was deployed to the Persian Gulf in 1990 and 1991. Serving in a maintenance unit in the six-week campaign to drive Iraq out of Kuwait, she was never on the front lines and suffered no physical injuries. But when she returned home to Maine, she felt exhausted all the time. She started getting severe migraines, and she struggled to focus, to the point where she asked to forgo promotions. “Every day was a struggle,” she says. “It was very scary and disappointing.” She was only 33.

Like many other Gulf War veterans with similar symptoms, Kroot was told her problems were due to mental stress and best treated with an antidepressant.

Carolyn Kroot at a military base in Saudi Arabia during the Gulf War. (Courtesy Carolyn Kroot)

She was sure it was more than that. “Numerous medical professionals didn’t believe me,” she says. “They thought I was a malingerer.” So when she heard in 2010 that James Baraniuk at Georgetown University was looking for veterans with symptoms like hers to participate in brain-scan studies, she jumped at the chance.

Ever since the Gulf War, a staggering number of veterans have complained of a long list of serious but nonspecific problems — headaches, fatigue, joint pain, dizziness, memory problems, insomnia, gastric distress and respiratory disorders, among others. Between 170,000 and 250,000 veterans — as many as a third of all troops deployed during that conflict — have chronic health complaints. That rate is much higher than for other wars, even though many of the sick never experienced combat.

These problems came to be called Gulf War syndrome or illness during the 1990s. But the huge variety of vague symptoms raised doubts about whether it was a genuine physical disease. Medical experts in the Department of Defense and beyond largely dismissed it, chalking up the veterans’ complaints to psychiatric illness. In the late 1990s and early 2000s, the Institute of Medicine repeatedly researched the subject, concluding several times that there wasn’t enough evidence to prove it was a bona fide medical condition. By the time the conflicts in Iraq and Afghanistan were underway, many people simply forgot about it.

Baraniuk, a professor of medicine at Georgetown, didn’t forget. Ever since the Gulf War ended, he had been treating former service members with health problems like Kroot’s. An allergist, he was accustomed to dealing with idiosyncratic symptoms. “A great medical challenge is to understand the patient when their complaints do not match the textbook,” he says.

Some of his patients — once fit, healthy service members — were in so much pain that they could scarcely dress themselves. “The continued official denial that anything was wrong, or that it was psychological, was in striking contrast to the characteristic features we saw in one subject after another,” he says. “These seemed like legitimate problems, and it was up to us to find ways of proving it.” He began searching for some objective, measurable way to demonstrate that something physical was wrong.

Baraniuk thought the brain was the best place to start because it processes pain and regulates mood, sleep and cognition. In 2007 and 2010, other researchers found evidence that the brains of symptomatic veterans showed distinctive anatomical changes.

Starting in 2010, Baraniuk and his colleagues at Georgetown’s Center for Functional and Molecular Imaging put Kroot and 30 other sick veterans (plus 20 healthy subjects) through physical and cognitive tests and scanned their brains. Tracts of white matter, the fibers linking brain regions, seemed to have declined in the vets. (A later study confirmed that their gray matter, which is where the nerve cell bodies are, also looked unusual.)

Next, the researchers tested the volunteers’ pain sensitivity with the “thumbsmasher,” a machine that applies pressure to 18 points on the body, and compared the results against scans assessing white matter function. Those who complained of serious fatigue and were the most sensitive to pain showed changes in the right inferior fronto-occipital fasciculus — possibly a sign of damage or inflammation. This long trunk of nerve fibers links cortical regions involved in fatigue, pain, emotion and reward-processing with the right ventral attention network, associated with cognition. If other sick veterans show similar changes, this pattern could be an important diagnostic marker — a big help in pinpointing a disease that’s difficult to define. Baraniuk plans to repeat the study, and also try to tease apart differences in the brains of sick veterans and sufferers of chronic fatigue syndrome, which shares many symptoms.

Many Gulf War veterans, Kroot included, suffer from symptoms of exertional fatigue, such as pain or a high heart rate after exercise. Some become so debilitated after strenuous activity that they end up in bed for three or four days afterward.

More than 20 years after the Gulf War, the possibility that something happened to the brains of these veterans is now taken seriously

So in a separate study, Baraniuk and his colleagues had 28 ill Gulf War veterans and 10 healthy adults undergo brain scans before and after riding a stationary bicycle. During the scans, researchers measured how the volunteers responded to the thumbsmasher and also gauged their working memory with a verbal test.

Veterans who experienced the most pain and highest heart rates after exercising also had smaller brain stems and cerebellums — regions that regulate heart rate and shortness of breath, among other functions — compared with those of the healthy volunteers.

“This type of change was amazing,” says Baraniuk. “It provides validation that [Gulf War illness] is real.” The physical evidence — visible on a scan — does more to convince skeptics than imprecise descriptions of symptoms.

“Finally, finally, after 21 years you’ve got something that’s objective, not subjective,” says Kroot.

Initial studies show changes in the brains of vets suffering from Gulf War syndrome. This scan shows the difference between a control brain scan (yellow) and the scan of vets (red) in the right inferior fronto-occipital fasciculus. (Rayhan et. al/PLOS One/DOI: 10.1371/Journal.PONE.0058493)

More than 20 years after the Gulf War, the possibility that something happened to the brains of these veterans is now taken seriously. “These new studies, together with previous studies, show that no matter how you choose subjects or how you define Gulf War illness, you still see structural changes in the brain,” says Roberta White, a neuropsychologist from Boston University’s School of Public Health. “There is very compelling evidence that brain damage has occurred.”

Larger studies are still needed to confirm these observations. But already, the official status of Gulf War illness has shifted. The Institute of Medicine partly reversed its earlier findings and now recognizes a connection between some symptoms and deployment to the Gulf. The Veterans Administration doesn’t formally recognize Gulf War illness, but it now treats many of its symptoms under terms like “chronic multisymptom illness.”

But the final piece of the puzzle is still missing: How did these soldiers get sick? Many troops were exposed to a class of chemicals called organophosphates, which include everything from pesticides to sarin gas, a chemical weapon. A research committee appointed by Congress and chaired by White concluded in 2008 that these compounds, many of which are nervous system toxins, were to blame. Baraniuk suspects them, too.

White’s own studies show that veterans who were most exposed to these substances showed reductions in white matter, and another 2010 study found smaller hippocampal volumes in the vets, much like the changes seen in victims of the 1995 sarin gas attack in Tokyo.

To Baraniuk, the change in attitudes in the past eight years has been gratifying because it helps in the quest for diagnosis and treatment for hundreds of thousands of ailing veterans. His patients aren’t alarmed by the findings that their brains have been affected, he says — they’re hopeful.

To manage her memory problems and health, Kroot, now 55, follows a regime of medications and mild exercise, together with memory-boosting strategies like writing herself reminder notes. She continues to hope for a better solution. “There is something here, a reason why these things are wrong with my body,” she says. “I have some hope that there may be a way to treat it someday.”

[This article originally appeared in print as "An Invisible Enemy."]

More From Discover
Health
Are the Effects of Cannabis and Alcohol in the Body the Same?
Mind
Nostalgia and Thinking About the Future Can Be Good For You
Health
Could COVID-19 Be Changing Who We Are?
Mind
How Your Brain’s “Fingerprints” Could Diagnose Disease
Health
Decorate For the Holidays Early and it Might Improve Your Mood
Mind
What Is Dissociative Identity Disorder?
Recommendations From Our Store
My Science ShopDiscover STEM Kits
My Science ShopDiscover 2022 Calendar
My Science ShopStrange Science
My Science ShopElements Flashcards
Shop Now
Stay Curious
Join
Our List