God, the Void, and a Tattoo 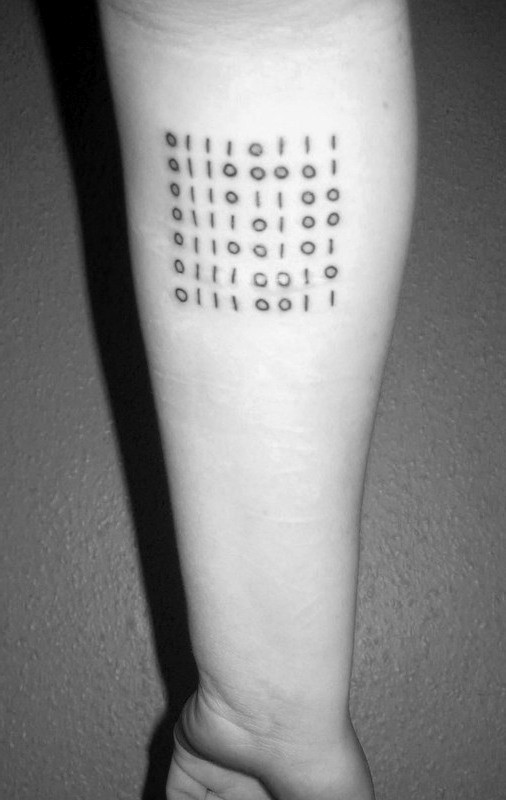 Helen writes, "I am getting married soon, and I wanted to get a tattoo to commemorate who I was before, something to remember my old name (as I am going to take my future husband's surname when I get married), but I also wanted it to be a secret. So this is what I got..."

Carl: Helen wrote her name in ASCII, the lingua franca of computers. Before ASCII was developed in the 1960s, computers often had no way to send text to one another, with dozens of different systems for representing letters and numbers. Even after ASCII was created, it didn't become common until 1981, when IBM used it for the first personal computers. Now ASCII is ubiquitous--a rare thing for such an old computer technology.

But Helen's hidden name has roots that reach much further back than the Kennedy administration--centuries, in fact. ASCII is a binary code, which can be represented easily by an electric current flipping between two levels, or, numerically, as a string of 1s and 0s. Letters, numbers, and symbols can be represented in ASCII by an eight-digit number. Instead of the base-10 system we are all familiar with, this is a base-two number. (So 3 can be represented by 11 [2+1], for example.) The power of binary codes was understood long ago. The I Ching, for example, is a series of symbols built up from solid and broken bars. In Western mathematics, the father of binary codes was Gottfried Leibniz (1646-1716). Leibniz recognized that turning numbers into binary made them extremely simple to handly mathematically. In fact, he speculated, you could build a machine that would do math based on binary numbers by sifting marbles through slots--a dream of the computers that would come centuries later.

But Leibniz saw a deeper meaning in the binary. "One is enough to derive everything from nothing," he wrote. To Leibniz, 0 represented the void, and 1 represented God. Only by translating nature into binary numbers did Leibniz believe that we attain perfect knowledge of the divine, by seeing its underlying reality and beauty. It was no coincidence that seven--as in the seventh day of creation, when all was created--is 111.

To Leibniz, I'd imagine, a binary code tattoo would not say what we once were, but what will forever be.

(For those of you who want to decode Helen's surname, here's a handy converter.)