Given the Choice, Liberals Would Rather "Kill Whitey" 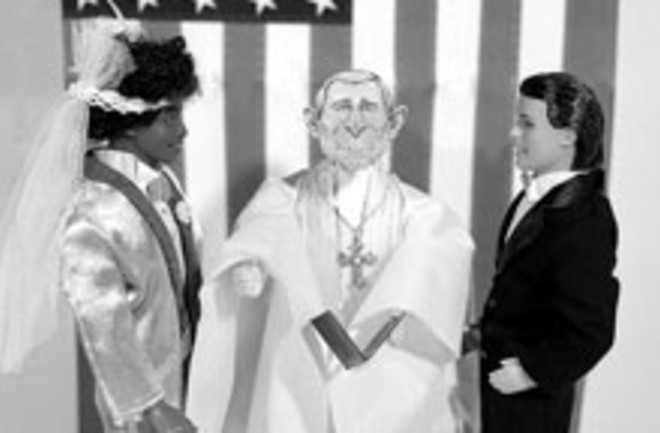 Recent work by David Pizarro at Cornell is shedding light the role that race and ethics play in politics, by asking people to sacrifice the lives of either Tyrone Payton or Chip Ellsworth III. OK, they didn't really have to sacrifice anyone, but each participant in the study was faced with a variation of the classical ethical dilemma called the "trolley problem." The trolley problem asks the question: Would you push someone on to the tracks (and kill them) to stop a trolley holding 100 people from crashing (and killing them all)? The paper (pdf) describes the twist that Pizarro and colleagues put on the trolley question when they asked it to California undergraduates:

Pizarro explained his interpretation of the findings:

Pizzaro told David Dobbs of Wired Science that he thinks these results mean we actually have two different sets of morals, one relating to the action itself, and the other focused on its consequences:

“The idea is not that people are or are not utilitarian; it’s that they will cite being utilitarian when it behooves them. People are aren’t using these principles and then applying them. They arrive at a judgment and seek a principle.”

So we’ll tell a child on one day, as Pizarro’s parents told him, that ends should never justify means, then explain the next day that while it was horrible to bomb Hiroshima, it was morally acceptable because it shortened the war. We act—and then cite whichever moral system fits best, the relative or the absolute.

DISCOVER: Whose Life Would You Save?

DISCOVER: Is Morality Innate and Universal?

More From Discover
Mind
Why the Human Brain Takes Decades to Develop
Mind
Research on Psychedelics and How Mushrooms Can Help Combat Depression
Mind
What Keeps Us in Bad Relationships?
Mind
Weed Might Not Make You Creative After All
Mind
How Does Alzheimer's Disease Lead to Death?
Mind
Calming Kids With Electronics May Affect Emotion Regulation Skills
Recommendations From Our Store
My Science ShopDiscover STEM Kits
My Science ShopDiscover 2022 Calendar
My Science ShopStrange Science
My Science ShopElements Flashcards
Shop Now
Stay Curious
Join
Our List