Get Your Baby Quickly & Easily With Accelerated Surrogacy! 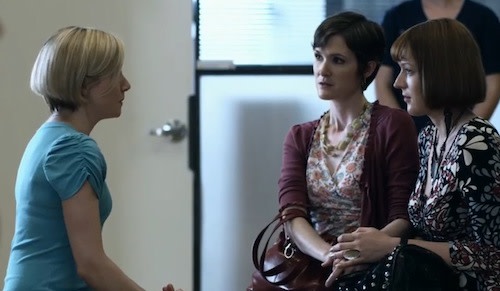 ," which is part of the FUTURESTATES

project by the Independent Television Service. In addition to accelerated surrogacy, at 92Y Tribeca's screening of FUTURESTATES films, I was treated to human-plant chimeras, self-aware androids, and a picture of just how much worse Arizona's draconian immigration laws are going to be in 15 years. My favorite, "Silver Sling," follows the story of a young Russian immigrant, Lydia (pictured above auditioning for potential parents). Faced with financial woes and no job, she plans to become a surrogate mother for the third time--a decision that could potentially render her sterile for the rest of her life. Lydia is forced to choose between her present problems and her future hopes. While the film itself is wonderful, what made "Silver Sling" stand out was Chun's treatment of the technology. Accelerated surrogacy in "Silver Sling" isn't good or bad, it merely is, with the ethics being different for each person involved. The complicated issues Chun brings to light are those currently pressing some surrogate mothers: their own desire for children, the risks and burdens of the procedure, and the "no-other-option" mentality driven by the problem of economic need. Even with the science-fictional elements of "Silver Sling"--the accelerated surrogacy and the fact that surrogate mothers are cared for by the assisted-reproduction company--it still feels intensely realistic. What's more, "Silver Sling" may have an idea of where we are in history. In the film, a spokeswoman for Silver Sling, the company that coordinates the surrogacies, describes accelerated pregnancy and surrogacy as indicative of the "Reproductive Revolution," echoing the preceding agricultural, scientific, industrial, and sexual revolutions. A fitting description, I should say. But why pretend the revolution is in our future instead of our present? With over 90,000 assisted reproductive technology births in Europe in 2007, I would venture that we are now right in the midst the Reproductive Revolution. More interesting, however, is a detail in the film synopsis left out of "Silver Spring" itself: According to the synopsis, "corporations offer financial incentives to their high-ranking female employees to pay for chemically accelerated surrogate births." Just as with the earlier revolutions, though the change began with a new technology, ultimately it was the shift in lifestyles, social mores, and culture itself that had the real impact. Half a century later and our society is still struggling to adapt to the sexual revolution; one can only imagine what changes the current reproductive revolution will bring. PS: If you're looking to guess just what will happen in the future, the FUTURESTATES website has a Predict-O Meter

that's worth checking out.