As a "World Cup tie in post" this one's a bit late, but here's a story that's been getting a lot of attention: According to scientists, Neymar uses instinct and not his brain when playing football 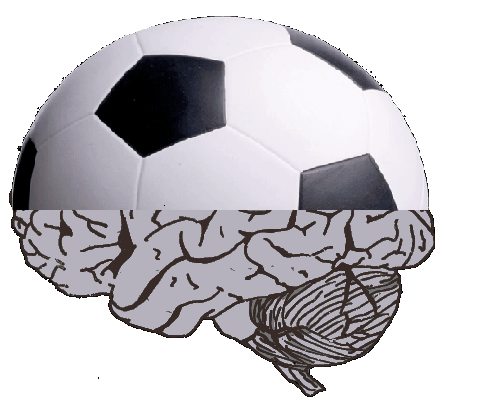 Yes, if you believe the headlines, research has shown that legendary Brazilian forward Neymar da Silva Santos is so good, he can play with his brain switched off. What's the reality? The research in question used fMRI and it was published in Frontiers in Human Neurosciences: Efficient foot motor control by Neymar’s brain, by Eiichi Naito and Satoshi Hirose. The free full text is here. Anyway, the study didn't quite find Neymar to be some kind of brainless soccer zombie, but the results were remarkable nonetheless. Naito and Hirose write:

We scanned Neymar's brain activity while he rotated his right ankle. We also scanned three other professional footballers, two top swimmers, and one amateur footballer, all of whom performed the identical task. We found activations in the left foot motor cortex regions during the foot movements in all participants. However, the size and intensity of [foot motor cortical] activity was smaller in the four professional footballers than in the three other participants, and Neymar's activity was smallest of all.

In other words, while performing a football-related motor task (ankle rotation), the pro footballers showed less neural activity than other athletes. And Neymar, one of the best players in the world, showed the least brain activity. This study was just about one very simple movement - so the headlines claiming that Neymar uses less brainpower to playfootball were extrapolating wildly. There's more to soccer than twitching your ankle. Nonetheless, the basic paradox remains - we see less brain activity in people with more expertise. This is not a new discovery, but Naito and Hirose provide a great illustration of the phenomenon, which one might call the Neymar Effect. For me, the Neymar Effect is a deeply disturbing one, because it seems to undermine the logic of many fMRI studies. Suppose you scan some patients with a disorder, and some healthy people, performing some task. You find that on average the patients show reduced activity in a certain area, compared to the controls. What does that mean? The intuitive interpretation is that less activity in a brain region means less engagement of that brain region's function. So if the region's function is 'memory', say, it would be natural to read reduced activity as less remembering. The results mean that the patients are not remembering as well as the controls are. In other words, it is natural (and very common) to start from neural activity and draw conclusions about psychological processes. A swathe of the fMRI literature is based on this approach. But the Neymar Problem is that any given dampening (or excess) of activity could just as easily reflect more (less) efficient processing, rather than less (more) processing per se. So the inference from activity to psychology is invalid. This is a separate issue from the fallacy of reverse inference, which concerns how we ascribe 'functions' to brain regions. The Neymar Effect means that even if our assumptions about the localization of function are unerring, we still might go astray when it comes to interpreting quantitative differences in activity.