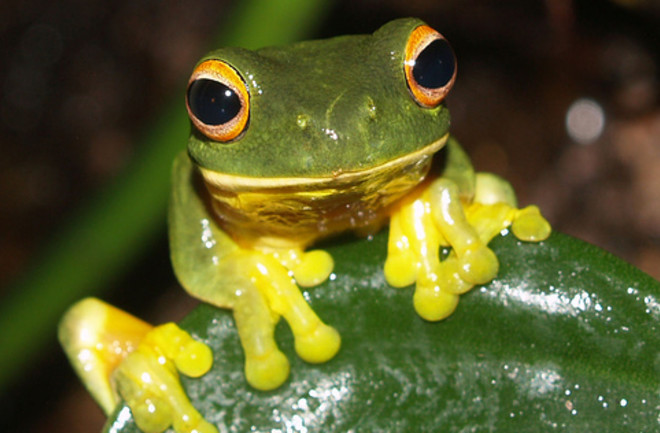 Researchers' new-found interest in frogs may only be skin-deep, but that's not necessarily a bad thing. Because hidden within their rugose (science-ese for "wrinkled") flesh may lie a bumper crop of powerful antibiotics. Though hardly a secret among researchers, who've been singing their praises as a potential treasure trove for newdrugs for years, efforts to systematically catalog—or even investigate—the thousands of amphibians that could yield promising new antimicrobial substances have been few and far between. At last week's American Chemical Society (ACS) meeting, a group of scientists from the United Arab Emirates University announced that it had broken this trend by conducting the first large-scale survey of frog skin compounds. Over the course of a year, they managed to isolate close to 200 novel substances, as SciDev.Net's Christine Ottery reports, mostly from species endemic to African countries—a small drop in the bucket when compared to the 6,000 frogs (and thus many hundreds, if not thousands, of unique skin secretions they hope to collect) they have received from labs all around the world, but a significant step forward nonetheless. These potent compounds, collectively known as antimicrobial peptides (which are strings of amino acids), are not only found in frog skin secretions, but in a range of other animals as well (us included) where they do triple duty warding off wave after wave of bacterial, viral, and fungal broadsides. Think of them as the body's own antibiotics. And unlike those you buy from the pharmacy, which mostly only put a cap on further bacterial growth, these antibiotics consistently go for the kill—often dismantling their victims' cell membranes, targeting vulnerable cell structures or destroying them outright. This aggressiveness has proven to be something of a double-edged sword. While antimicrobial peptides work wonders against the legions of micro-invaders laying siege against our bodies, their zealousness can also work the other way around, attacking the very cells they are meant to protect. The UAEU researchers have been trying to mitigate this problem by tinkering with the peptides' structure to make them less dangerous for humans but more deadly for pathogens. Among the standouts they've already identified are one compound from the mink frog that fights "Iraqibacter" (Acinetobacter baumanii), a bacterium that inflicts drug-resistant infections on (surprise) wounded Iraq War veterans, and another from the foothill yellow-legged frog that could upend the formidable methicillin-resistant Staphylococcus aureus (MRSA) and other multi-drug resistant bacterial strains. Though only time will tell if these AMPs can be refined and turned into viable drugs, the second compound alone would easily justify the extensive testing required. And, who knows, there's always the slight chance that we'll really luck out and stumble upon some new miracle compound, or several, that could cure our most intractable diseases and potentially ward off future plagues. The other, perhaps more important, question is whether these substances will work just as well in the human body as in the laboratory setting, where all of these experiments have been done. Even putting aside the peptides' potential for mutual destruction, there is no way of knowing how altering them to make them compatible with our bodies will affect their efficacy. According to the researchers, clinical trials may only get underway 5 years from now. Let's just hope there will still be enough frogs by then to sustain their work. Though it's hard to put a number on it, I'd wager that we have already lost a significant number of promising antibiotic substances through our destruction of the rainforest and other highly biodiverse environments. Some day, the only thing standing between mankind and a devastating new pandemic could very well be a frog- or other animal-derived antibiotic substance.