Fringe: The Wasp, The Bat, The Gila Monster, And The Tiger 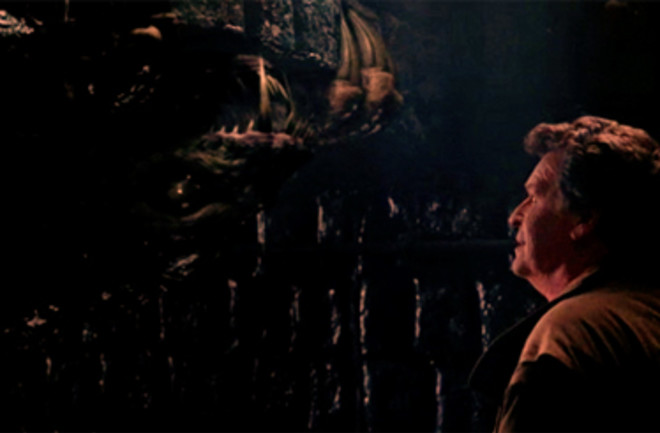 Well, now we know what you get when you combine a wasp, a bat, a gila monster, and a tiger into one giant nasty thing: asexual reproduction! OK, not really, that just happens to be what happened on last night's episode of Fringe (spoilers below.) A geneticist combined these different creatures to produce one new, scary one. The beast went on a rampage, injecting its eggs into several people, and before we knew it larvae were bursting out rib cages. Ick, for sure. But what I found most intriguing were the organisms the geneticist decided to combine. What was his plan. Here's a look: Gila monster: One of two venomous lizards in the world. The gila monster generally lives unobtrusively in the American Southwest. It's venemous, but the venom is generally used in self-defense. Why the Fringe Monster needed it: Not sure, really. Gila monsters can eat a lot food at one time and then not eat for a while, a trait which might be useful. Tiger: Tigers are solitary hunters who typically live across southern and eastern Asia. They're also cats, and possibly vulnerable to having their bellies rubbed, but I'm not sure I'd try that. Seems like a good way to have my head playfully batted off my shoulders. Why the Fringe monster needed it: I think it had to be for size. Tigers can get to be nine feet long and weigh 600 pounds. Most of the ingredients described to us are small or even tiny creatures. Maybe they used the tiger to provide the bulk for the beast.

: There are actually several species of M. macrurus, but they share the characteristic of preying on the larvae of beetles, weevils, or butterflies. Why the Finge monster needed it: These wasps lay their eggs via a long ovidepositor, just like our friend the monster. The female wasp injects the eggs into the host, and the larvae feed until they go into chrysalis. After chrysalis, the mature wasp eats its way out of the host. (This life cycle has been grist for the science fiction mill before, being the inspiration for the modus operandi of the eponymous creature in Alien and its sequels.)

The common vampire bat, made famous through the ages as a carrier of rabies, but also as the inspiration for Satan's bat wings. Why the Fringe monster needed it: On the show, it's exposited that the bat is the solution for a fundamental problem in combining beasts: How do you get the beast not to reject its hybrid parts? Bats, they tell us on the show, have a special immune system that allows the bat to carry diseases without being infected by them. Well, I couldn't find evidence of that (though I'm happy to have the way pointed to me). What I did find is that bats, especially vampire bats, carry rabies, and in fact are the primary vector for rabies in humans. They can also carry ebola virus, and maybe other things. But it's not clear they do this any differently than any other rodent. But vampire bats offer a number of other useful traits for a big monster. As hunters, they are incredibly quick. Typically they will land near prey, then creep up on it and leap at the last second to pounce on it, no doubt with a malicious blood-sucking grin on their tiny faces. Once there, their saliva has an anti-coagulant that allows them to suck blood until they're sated or unseated from their hold. What monster worth its salt wouldn't want those skills? Fringe never gives us a hint of what this monster might have been intended for. Possibly it was simply a proof of concept. But the combination of beasts is suspicious: two stalking predators, two venomous creatures, and one that lays its eggs inside another creature. Plus they grew it really big. Was the plan to unleash this bad boy on Tokyo?