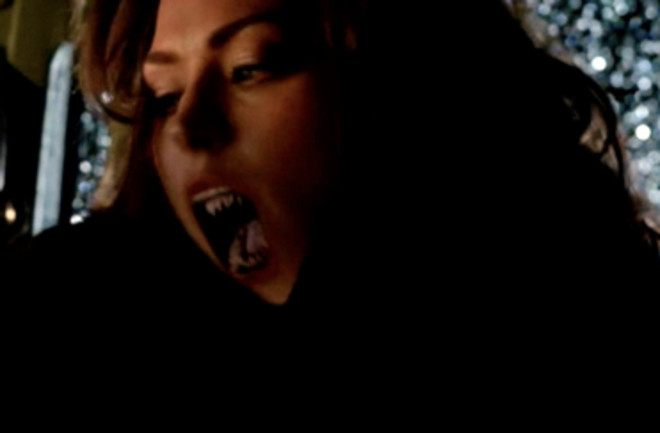 This week's travel advice from Fringe: When picking up the ladies at night clubs, avoid the ones with scary blue eyes who don't talk. They tend to have shockingly pointy teeth, and are likely to eat you. Or at least, parts of you that you might wish you had later. More on the nutritional content of your parts after the jump, which contains mucho spoilers. In this week's episode of Fringe, we have a woman, Valerie Boone, who suffers from a disease that makes her into a vicious cerebrospinal-fluid-drinking sort of vampire. It's ugly stuff: she dances languidly at a night club, gets picked up by cocky young men, goes home with them, and then snaps their necks so she can drink their CSF. Nummy! On the plus side, if you're going to make a human body your soda fountain, CSF isn't a bad choice. The pressure inside the spinal cord is relatively low, just 200-300 mm of mercury. That's pretty far below air pressure, so the CSF should come flowing out like water out of a straw once she tears it open with her scary pointy teeth. But I hope she's not too thirsty. The human body only produces 500 ml of CSF a day, and it typically has 130 mm at any given moment. CSF is produced from the choroid plexus, a paired organ attached to the brain. The fluid fills the fourth ventricle of the brain and flows out to surround the brain, filling the area between the pia mater and the dura mater, two membranes that line the brain and the skull, respectively. The CSF provides a cushion, and a degree of buoyancy to the brain, protecting it from sharp blows and whiplash. The CSF also carries toxins and drugs away from the brain, and it helps transport hormones from one part of the brain to the other. But even with all these roles, it doesn't actually have a lot of substance. It's fairly salty, but it has just 15-45 mg/dl of protein and 50-80 mg/dl glucose. Multiplied across 130 ml, she's only getting, at most, 65 mg of glucose and 58.5 mg of sugar. She'd do better eating a Snickers. We're told mid-episode that Ms. Boone is drinking the CSF because a disease is using up her own. Technically speaking, the CSF is on a one way journey: From the brain to the dura mater, to blood vessels, which carry it off. But leaving that fact aside, there is some evidence that the body is aware of what's going on with it's CSF and tries to compensate for problems. Scientists experimented with altering the sodium concentration of CSF in sheep. They found that increasing the sodium concentration caused them to avoid salty food, while decreasing it led them to desire more. So maybe Ms. Boone should have been eating more potato chips, and fewer people? As she became CSF depleted, she would start to suffer headaches, loss of hearing, blurring of visions, tinitis, and numbness of the face. Sounds unpleasant. No wonder she was so cranky all the time.