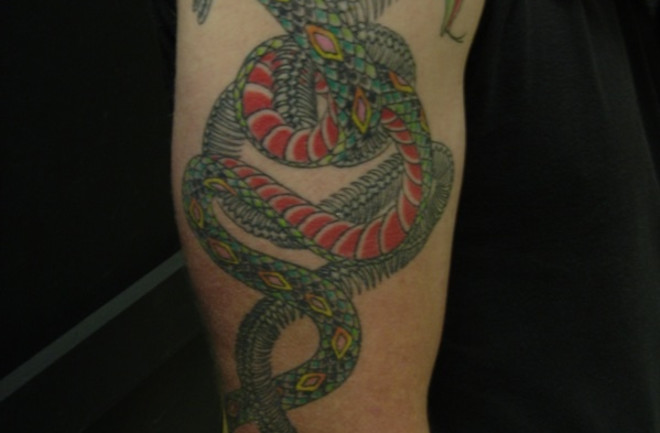 "There is no rational explanation for this tattoo, only post-inking scenarios. I do not study snakes, nor do I particularly like them. There is, however, a when. The idea and the product came at the end of a yearlong effort to delineate the biology behind a fossil skeleton. Although I have always sought to explain hard tissue morphology by reference to soft tissues, this work took me way beyond the limits of my previous understanding. The result was a massive expansion of my thinking on how modern biology can be integrated into understanding fossil populations. In the post-publication stupor, the snakes appeared and got inked. I suppose you could say that they represent the commingling of knowledge from living forms with that from fossil forms. But then again you could suggest any number of ‘rational’ explanations for having two large snakes permanently inked on your arm."-- Gary Richards, UC Berkeley