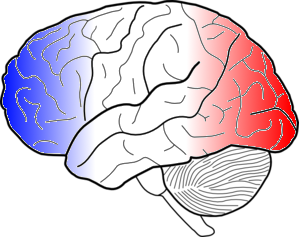 A curious case report from Italian neuropsychologists Nicoletta Beschin and colleagues: Compulsive foreign language syndrome: a clinical observation not a mystery The authors describe a 50 year old Italian man, JC, who turned into a 'caricature' of a Frenchman after a brain injury caused by a vascular anomaly. JC insisted in speaking French at all times, even though his knowledge of the language was rather poor (he had learned it at school, but not practiced it for decades.) What's more, JC not only spoke French, he acted stereotypically 'French' too: "he speaks it in a fast pace with exaggerated intonation using a movie-like prosody and posing as a typical caricature of a French man."

He uses French to communicate with everybody who is prepared to listen; he speaks French with his bewildered Italian relatives, with his hospital inmates, with the consultants; he spoke French even in front of the befuddled Committee deciding on his pension scheme. He claims that he cannot but speak in French, he believes that he is thinking in French and he longs to watch French movies (which he never watched before), buys French food, reads French magazines and seldom French books, but he writes only in Italian. He shows no irritation if people do not understand him when he speaks in French.

Along with the French compulsion, JC shows some other behavioural abnormalities, but even these have a Gallic theme:

He presents with some delusions of grandeur, sleep disturbances and has some compulsive behaviours: he buys unnecessarily large quantities of objects (e.g., needing two hangers he bought 70) and he makes tons of bread to his wife's chagrin. He also shows unjustified euphoria (which he labels joie de vivre): for example in the morning he opens the windows and shouts bonjour stating that it is a wonderful day. He manifests signs of social disinhibition, for example proposing to organise a singing tour for his daughter's teenage friend or offering French lessons to his neighbours.

Despite this, if pressed, JC could still speak Italian perfectly, with no accent. Beshin et al. conclude that JC's "compulsion" to speak French is distinct from the so-called foreign accent syndrome, a neurological disorder in which patients continue to speak their usual language but in a foreign accent. JC seems to suffer from a foreign language syndrome. Beshin et al. conclude that

Perhaps... previous, albeit shallow, knowledge of a foreign language, apparently long forgotten, can be switched on by a brain insult and speaking it becomes a compulsive behaviour.

The authors don't attempt to determine the neural basis of the patient's strange symptoms.