For Stealthy Electric Cars, Auditory Illusions Could Save Lives

The silent purr of an electric car is a selling point over the vroom of a gasoline engine, but it comes with an undesirable side effect: An electric car can pounce on unsuspecting passerbys like a puma on prey. In fact, the NHTSA found that hybrid electric cars are disproportionately dangerous to pedestrians. To deal with this problem, it has been proposed that sound be added to hybrid and electric vehicles, whether it be bird-songs or recordings of someone making “vroom vroom” sounds. In this light, I wondered whether it might be possible to add “smart sound” to these dangerously quiet cars destined to rule the road in the near future. The solution, I realized, might come from faster-than-light-speed objects on the moon. I’ll get to this crazy-sounding part in a bit. The Melody of Movement In setting out to solve this problem, I reasoned that when electric cars are moving very fast they make enough sound to be heard due to the rumblings of the car parts. It’s when they’re moving at lower speeds that they’re most perilous, because at these speeds they’re most silent. Therefore, if electric cars are to be fitted with some sound, it should be designed to work even at lower speeds---or, especially at lower speeds. Next question was, What sort of sound do we want on slowish, stealthy electric cars? To answer this, it helps to grasp the sorts of cues your auditory system uses for detecting the movement of objects in your midst. The most obvious auditory cue is that nearer objects are louder, and so when you hear a moving object rising in loudness, you know it’s getting closer. But that’s not the most important auditory cue. To illustrate why, imagine walking along a curb with traffic approaching and passing you from behind. The important observation here is that when this happens you aren’t in the least worried. Even without seeing the car, you know it’s merely passing you despite the massive crescendo in its sound. Why? 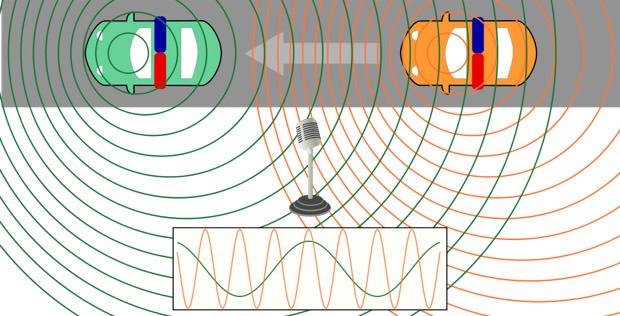 The Doppler shift changes the observed pitch of the siren as the car moves.

You know the car isn’t going to hit you because of its pitch. Due to the Doppler shift, this car has a falling pitch

, and this falling pitch contour tells your brain unambiguously that, although the car is going to get arm-reachably close, it is going to pass you rather than collide with you. If it were going to collide with you, its pitch would be high and constant---that’s the signature of a looming collision. The most important cue about the trajectories of objects moving around us comes from pitch, and how pitch varies over time---the melody of movement. So, I reasoned, that’s what needs to be added to electric cars. It would be easy enough to add sound to the cars, making them noisier (e.g., the bird songs or “vroom vrooms” mentioned earlier). By doing so, one’s natural capability at recognizing the trajectories of moving objects would kick in. But recall it is relatively slow moving electric cars that are the problem, and although we can sense the (Doppler) pitch changes for movers at speeds as low as one-meter-per-second slow walks, we could sense movers’ trajectory more ably if their pitches varied over wider ranges. In this light I asked, Might there be a way to give slow-moving electric cars the Doppler shifts of fast-moving, easier-on-the-auditory-system, objects? Answering this question requires a detour into things that move faster than light… Faster-Than-Light Objects on the Moon If you shine a laser at the moon and flick your wrist, the spot of light will travel across the moon’s surface very quickly. In fact, it is quite possible that you can make it go faster than the speed of light! Don’t believe me? Let’s do the numbers. The circumference of the moon is about 10 million meters, so your laser dot might travel about half that, or 5-ish million meters when it sweeps across. And you can rotate a laser quickly---I can do 180 degrees in about half a second. Given that the moon fills only about a half degree of the sky, the laser dot might do its 5-million-meter dash in about a thousandth of a second, which comes out to roughly 3 billion meters per second, or 10 times the speed of light. But isn’t that impossible? Isn’t that the sort of thing that causes neutrino dust-ups

? No. Whereas it’s impossible to go faster than light, it’s not impossible to make something seem to go faster than light. A spot of light on the moon isn’t a thing at all. When a dog goes gaga chasing a laser, it’s because he thinks the erratic dot is a real thing, maybe an insect or mouse. But the spot isn’t an object at all---it’s only an illusory object. His and your brain perceive it as an object because the sequence of lit-up spots looks like the path of a moving object---that’s the same reason that videos show us moving objects even though nothing on the screen is actually moving. So, the visual illusion of going faster than light is possible, thanks to our visual system’s eagerness to see objects. A great place to experience this for yourself is in the auditory domain. Consider cutting with scissors. As you close the scissors, the point where the two blades touch moves from the joint outward toward the tips. That’s moving sound. And it might be moving very, very fast, even though the scissor blades may be closing fairly slowly. A simple scissor-close could lead to a sound that moves at hundreds of miles per hour or more! For a distinct example, if you drop a meter stick onto the ground, and one end hits the ground a hundredth of a second before the other, the sound-producing collision with the ground will travel along the meter stick in a hundredth of a second, or at 100 meters per second---that's more than two hundred miles per hour. Of course, it’s not moving at two hundred miles per hour because there is no it that’s moving in the first place. The “moving sound” in these scissor-like examples is just a sequence of distinct sounds that happen to occur one after another. It’s only your senses that think there’s something moving (and your sense’s limits don't have to respect physics’ limits). The crucial point is this, something I discuss in my book, Harnessed

: Even though these fast movers are illusory, they still undergo a Doppler shift as if they are real and moving fast. Driving With Scissors We’re now most of the way to my idea for adding smart sound to quiet electric cars. Earlier we saw that the principal cue to a moving object’s trajectory is the “melodically” varying pitch from the Doppler shift, and reasoned that it would be great if slower-moving electric cars could have an amplified Doppler shift that is thereby easier to perceive. And then, just above, I described how amplified, illusory, Doppler shifts are, in fact, possible, via mechanisms as simple as scissors. To amplify Doppler shifts there’s no need to actually place anything on the car that's moving quickly. All that’s needed are scissor-like, illusory-moving-sound mechanisms on cars. Of course, I'm not actually suggesting placing (iteratively audibly closing) scissors on cars. Rather, the point is that by affixing to an electric car any mechanism creating a fast-moving illusory mover headed in the same direction as the car, electric cars can not only announce their presence with sound, but present a much amplified perception of their trajectory. And that could be music to a pedestrian’s ears.