For Obese Women, a Milkshake Brings Less Pleasure to the Brain 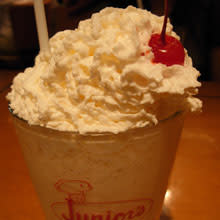 In a counterintuitive new study, researchers have found that obese women get less pleasure from drinking a chocolate milkshake than average-weight women, and suggest that obese women are therefore more likely to overeat in an attempt to get that high. Researchers used a fMRI brain scanner to record women's levels of the pleasure-providing brain chemical dopamine while they were sipping milkshakes, and found that obese women had a muted pleasure response. They also studied a dopamine-regulating gene variant that has previously been linked to obesity, and showed that women with this variant had the lowest dopamine levels and were also very likely to gain weight over the ensuing year. Dopamine expert Nora Volkow says this furthers the research on the genetic component of obesity:

"It takes the gene associated with greater vulnerability for obesity and asks the question why. What is it doing to the way the brain is functioning that would make a person more vulnerable to compulsively eat food and become obese?" [AP]

Lead researcher Eric Stice says that the study, published in Science [subscription required], brings up the possibility that some people are born with a vulnerability to obesity, while others eat their way to an unsatisfying addiction.

"Probably this is related to downregulation of the brain's reward circuit. The more you do things that are rewarding, the less reward you see," Stice says. "The more you eat an unhealthy diet, the more you see this blunted pleasure response to high-energy foods" [WebMD].

Experts say the findings compliment a recent theory that obesity is akin to drug addiction, in which dopamine also plays an important role.

"This research follows what we have seen in addictive people," says Nora Volkow, director of the National Institute on Drug Abuse. "At first we thought they were more sensitive to pleasurable responses. But research has shown exactly the opposite, that they have a blunted response to drugs and release much less dopamine. With obesity, it took everyone by surprise" [Newsweek].

Related Content: DISCOVER: Is Overeating an Addiction? DISCOVER: The Biology of Appetite